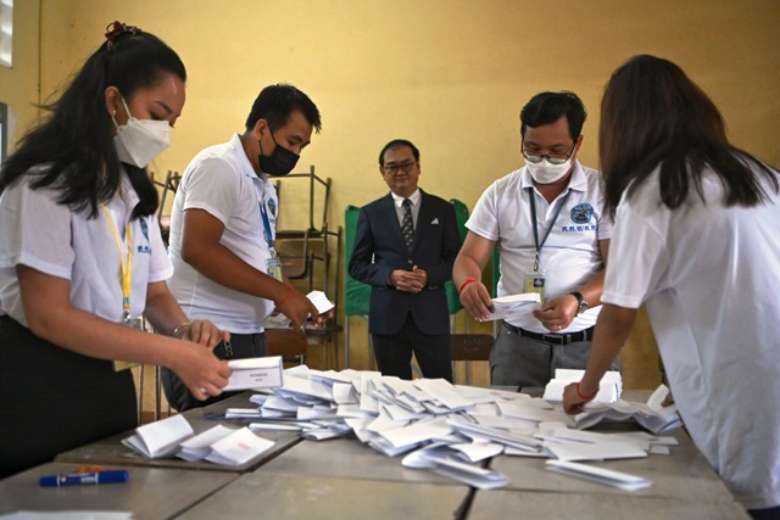 Cambodian election officials count ballots observed by Sovannarom Dim (center) of the National Election Committee at a polling station during the commune elections in Phnom Penh on June 5. (Photo: AFP)

Counting continues and the CPP was expected to win 1,648 commune chief positions while the opposition Candlelight Party took the four remaining posts, according to the government-friendly Fresh News.

Fifteen other parties took up the balance with 82,786 candidates contesting commune posts, which are the equivalent of local district elections elsewhere.

The Candlelight Party was formed out of the remnants of the Cambodian National Rescue Party (CNRP), which was outlawed by the courts after it won 489 commune chief positions and 5,007 council seats at elections five years ago.

“These elections are worse than the previous ones in terms of transparency and honesty,” Sam Rainsy, CNRP leader in exile, said on social media. “The public is not being allowed to witness the vote counting as required by the NEC.”

“We have no plans to demonstrate, but we want to make known our concern or the concern of the electorate about the irregularities that affect their will, and we ask for improvement”

Son Chhay, vice president of the Candlelight Party, also said the results did not reflect the will of the people and that abuses committed during the lead-up to the election amounted to vote rigging.

“We have no plans to demonstrate, but we want to make known our concern or the concern of the electorate about the irregularities that affect their will, and we ask for improvement,” he told journalists.

However, Yun Young Ho, general director of the Universal Peace Federation, said there was no indication of threats or irregularities on election day or during the May 21 to June 3 campaign.

“Overall, the delegation is of the view that the election was successfully organized in a free, fair, inclusive, peaceful, transparent and safe environment and in accordance,” he added.

Tompen Virakvitou, president of Light Development Organization for the Most Vulnerable People, echoed those sentiments, saying the poll had strengthened Cambodia’s democracy and rule of law.

“The success of the 2022 communal election is yet another significant step in promoting the kingdom’s ongoing reforms to realize the people’s aspirations for peace, democracy and development,” he told a press conference.

Korn Savang, a senior monitor with the Committee for Free and Fair Elections in Cambodia, told the Khmer Times there were two factors that could possibly have resulted in the turnout.

“First, I see that these people were not given clear and accurate information about the election process and the political situation has become unclear since 2017,” he said. “Second, the voter registration process was limited to people inside the country and did not include migrant workers and people staying abroad.”