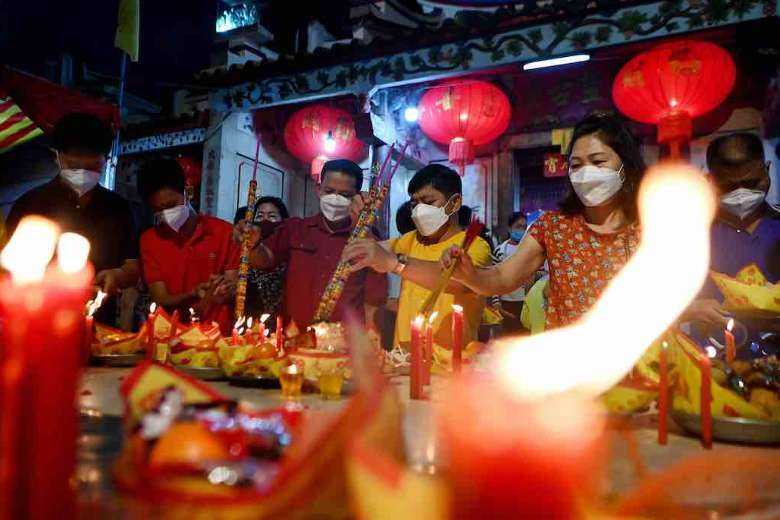 Devotees light incense sticks at a temple to mark the start of the Lunar New Year in Ta Khmao, Kandal province of Cambodia on February 1, 2022, ushering in the Year of the Tiger. Cambodia’s Omicron cases quadrupled within a week after the festival. (Photo by TANG CHHIN Sothy / AFP)

Authorities have placed Cambodia on alert and urged people to implement health measures and social distancing rules after the official number of Covid-19 cases more than quadrupled over the past week.

The health ministry said nearly all cases were the Omicron variant of the pandemic with more than 200 cases reported over the last 24 hours.

Cambodia had recorded less than 50 Covid-19 cases per day in recent months, however, observers say that number is probably much higher given the government stopped rapid testing for the disease at the end of September when caseloads were closer to 900 a day.

“Although the Omicron variant is mild compared to the Alpha and Delta variants, the infection rate is still high and it may spread from Phnom Penh the capital to the provinces,” he said in a dispatch by the government-friendly Fresh News service.

“We should limit indoor social gatherings at some places, including gatherings in bars or for wedding receptions and religious purposes,” he added, urging Cambodians to get their booster shots.

Cambodia earned widespread praise last year for a rapid rollout of its vaccination program reaching herd immunity with 80 percent of the population vaccinated by the end of October.

In a bid to accelerate the vaccination program and booster shots, the health ministry has sent mobile medical teams into the countryside.

Health Minister spokesperson Or Vandine told journalists during an inspection of vaccination sites in the eastern province of Kratie that new measures would deliver vaccines to people in their homes in addition to provisions already made at existing vaccination centers.

“Some people have been fully vaccinated and don’t think that the booster shot is necessary. Also, they are busy with their work. Some people have to work in their fields and remain there for months, and thus find it hard to go to get the vaccine,” she said.

Additionally, the health ministry said in a letter to local media that the latest spike in cases could be traced to the lax implementation of Covid-19 preventive measures, especially during gatherings over recent weeks, leading to “massive spikes” in cases.

“We need to be more patient as we learn to live with the presence of the Covid-19 virus and be more cautious about the economic and social recovery,” the letter said. “We must take appropriate actions to prevent transmissions so that it is not too late and there will be no regrets.”