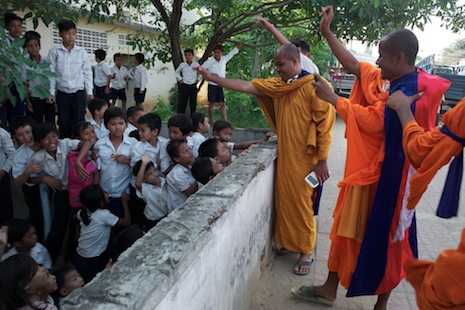 Peering at the dusty grounds from which dozens of monks just departed, Phu Hong cut a lonely figure at his Phnom Penh pagoda.

“I really want to join too, but I am afraid of the chief monk,” he said, as he swept away debris left by protesters who had briefly decamped at the Buddhist temple for lunch and a rest on Monday.

For nearly half his life, the 32-year-old has served as a monk. But it is only recently that Hong, like many of his peers across the country, has grown politically engaged.

Even a year ago, monks were a rare sight at protests and strikes. In the midst of post-election turmoil, however, the clergy has become a vibrant force. Defying the orders of their religious leaders, these monks have braved detention and physical abuse as they wade into the country’s murky human rights scene. Though Hong and others at his pagoda may have followed their abbot’s request that they don’t involve themselves in demonstrations, many have been less circumspect.

On Tuesday morning, an estimated 300 such monks entered Phnom Penh alongside thousands of supporters. The group had spent 10 days marching from the edges of the country on five national highways; some covered more than 1,000 kms en route to Phnom Penh.

“The title of this march was peace and justice. We have seen clearly along the way that Cambodia doesn’t have peace and justice,” Venerable But Buntenh shouted through a loudspeaker to protesters who had gathered in front of parliament to mark International Human Rights Day.

Buntenh, whose outspoken rhetoric and savvy use of social media has gained him thousands of followers across the country, believes the time has come for monks to step up.

“This event in Cambodia now – two political parties making political deadlock – needs the monks to come and intervene. Religion is the only neutral spectre that can solve the problem,” he told reporters after the crowd had dissipated. “We work for the whole nation.”

“Those who say the monks should not participate in political events, they do not understand the real principle of Buddha’s teaching.”

That attitude has put him at odds with both the government and the highest ranking members of the clergy. The supreme patriarchs, whose ties to the ruling party are well known, have taken pains to order monks away from demonstrations. Abbots have threatened to have monks defrocked should they attend opposition rallies. And when Buntenh meets with members of his Independent Monks Network, police have taken note, attendees maintain.

But the public support received by these monks in this Buddhist dominated nation suggest a more vocal role would be welcomed by many.

“I’m impressed that they do this marching,” said Hem Sopheap, 57, a widow watching the procession outside of the spare one-room home she shares with her two grown children.

“I want them to give a voice to the poor people. Local authorities always try to pressure and exploit us, so it’s good to have a voice.”

Tens of thousands have lined the streets over the past 10 days, providing offerings to the monks and receiving blessings. As one convoy made its way slowly down National Road 5 yesterday, monks riding in a tuk tuk with a loudspeaker strapped to the top encouraged citizens to avail themselves of their rights.

“You have the right to talk about anything, the right to walk anywhere,” they shouted at bystanders spanning every age and class.

“I don’t only support their purpose, I also gave them some physical support – food and water,” said Hok Chhay. Standing near his construction materials shop, Chhay and his neighbours had gathered to listen to the monks during one of their many pauses to deliver speeches on human rights.

“Normally, the monk is the one who provides support or help to the people. When they see the human rights violation or the pressure on the people, they’re not happy either. They have to come out and help,” piped in ice vendor Chhum Sokha.

Tuesday’s demonstration, during which monks read out a litany of human rights violations that Cambodians along their routes had recounted to them, was peaceful, but others have been less so.

Last month, a garment factory strike erupted into violence, resulting in the death of one bystander. A dozen monks were detained during the melee, according to rights group Licadho, which released photos of police kicking an unarmed monk standing with his hands clasped behind his head. In the past, outspoken monks have been defrocked, arrested and even – on one occasion – shot dead in mysterious circumstances. In 1998, the last time monks were so visible at demonstrations, dozens were shot at while leading a march for peace.

For those who attended this week’s trek, such images have been seared on the mind.

“Sometimes I think like that, but I have to join,” said 20-year-old monk Kosal Son, who has been to nearly every high profile demonstration held in the last six months.

“The police have their shields, their electric batons. If it were only me and my friends, yes, I would be afraid, but there are many monks now and civil society, so we consolidate and are stronger.”