A fisherman in Kandal's Lvea Em district prepares his boat at the Phnom Penh ferry terminus, where an ethnic Vietnamese community occupies a small village of floating homes (Photo by Abby Seiff)

Located just a ten-minute ferry ride from Phnom Penh, the floating village of Kandal’s Preaek Akrei Khsat commune is a world apart. Everyone speaks Vietnamese. Some speak Khmer, but many more speak it poorly or not at all. Houses are moored to one another — rising in the rainy season, dropping in the dry season, and able to move at a moment’s notice should the authorities clear them out. Almost everyone has a residency card but almost no one has an ID card or citizenship documents. Born and raised in Cambodia, these ethnic Vietnamese are excluded from almost everything afforded to ethnic Khmers: schools, health care, job opportunities, land, assimilation.

“We’re just living in the same country, but we’re treated worse. We can’t say anything. We have to be afraid of them,” Dy Ya, 31, said with an air of resignation.

As Ya spoke, his baby son toddled around the houseboat, steadying himself on the prow’s knee-high fence. Ya paused to wrap him in a life-vest, then continued.

“Every Vietnamese is scared of them. They are always scared,” he said insistently.

Few in the village publicly agree. Ya’s neighbor, Sok Kea, a 65-year-old matriarch whose children and grandchildren occupy several adjoining homes swears there are no problems. Anti-Vietnamese sentiment in Cambodia is nothing new, but it has grown more public since the July 2013 national elections. A long-standing scapegoat for the opposition party, the Vietnamese have found themselves an increasingly popular target of public discontent during a year of post-election unrest. After clashes between striking garment workers and security forces in January left at least five dead, angry protesters looted and razed several Vietnamese businesses. The following month, a Vietnamese man was killed in a racially charged attack.

Government policies, meanwhile, have cemented the scapegoat status. Few of the estimated 500,000 ethnic Vietnamese have citizenship papers, opening them to allegations of illegal immigration and closing them off from basic rights. Though many come from families who have lived in Cambodia for generations, ethnic Vietnamese have found themselves cut off from the opportunities open to their countrymen. Indeed, the bulk live ghettoized in impoverished and unhealthy floating communities as they have no access to land ownership.

Bowing to political pressure, the government in August began a census of non-citizens, vowing to deport those living illegally in Cambodia. Thus far, more than 500 people — 350 of them Vietnamese — have been deported.

Ideally, the census would lead to improved status of those deemed legal. But the government has given no indication what the endgame will be. Instead, the census has made the situation more tenuous for the many without papers, while creating a new source of racial tension.

“There is always the potential for census information to be used to violate rights, incite further divisions or even violence,” said Nicole Girard, Asia Program Coordinator at Minority Rights Group. “Given the government’s history of not ensuring the right to citizenship for ethnic Vietnamese, I hope that this census will actually benefit these communities.”

In Lvea Em, some residents have been counted, but none have been given any indication their status could be upgraded to “citizen”. Most remain completely in the dark about what the count means for their future prospects.

“I do have papers, and I can have an ID card [but don’t],” said Duong, 32, another member of the floating village. “But if they want to force us to leave, then they will.”

Though it has limited their ability to assimilate, residents said that banding together in Vietnamese-only communities was their best bulwark against attacks.

“If the Vietnamese community lives next to each other, [Khmers] won’t bother us. But when it’s a smaller community, they bully them,” said Ya’s wife Nga.

When Nga heads to the market to sell fish, she contends with the type of casual racism facing many Vietnamese. Some customers are fine, others pick fights, calling her yuon, a Khmer word for Vietnamese that can take on a pejorative meaning.

“Some people treat me very badly, blaming us for taking away the land. But they [Cambodia] don’t have money; they sell to Vietnam because Vietnam has money. But people just blame me — it’s so disgusting.” 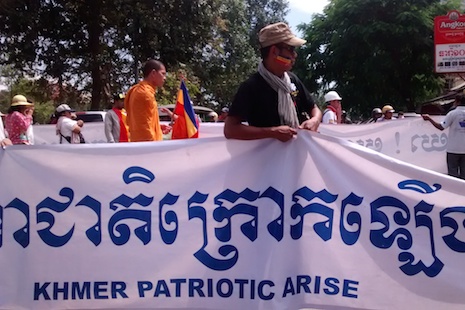 In recent months, the blame game has been amping up.

Last week, hundreds in Phnom Penh joined a five-day protest against comments made by a Vietnamese diplomat. In July, the embassy spokesman (since removed) said that the southern portion of Vietnam known as Kampuchea Krom had been Vietnamese territory long before France ceded it in 1949. Though historically accurate, the statement enraged many who saw it as disrespectful and indicative of the power Hanoi holds over Phnom Penh.

At the protests, where demonstrators burned Vietnamese flags and called for a boycott before threatening to raze the embassy, talk of an insidious power grab was on many lips.

“There are too many here because they come here as illegal immigrants and the government does not take any action,” said Ly Ma, who estimated that four million Vietnamese were living in Cambodia.

“It is very dangerous for our country… They have colonized Cambodia secretly. Vietnam sends people to colonize secretly.”

He and others insisted they did not want to see violence, but urged the government to enforce the law.

Thach Setha, the Khmer Kampuchea Krom leader who organized the protests, stressed that he “respects the human rights of Vietnamese people [in Cambodia] who want to live in peace”.

“It’s the Vietnamese government who wants to push people to violence,” he told ucanews.com. “But we don’t need violence. We still keep the peace.”

With anti-Vietnamese sentiment on such public display, however, concerns are mounting among rights monitors and community members.

“They just live their lives and if something happens, they blame us,” said Ya. “We are enemies. We’re always scared of Khmers.”

Additional reporting by Do My Linh and the Phnom Penh Post.