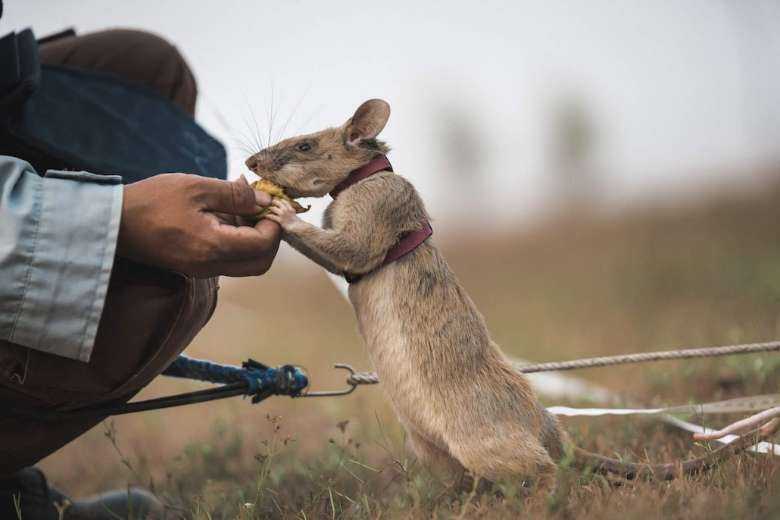 Magawa receives a treat while at work detecting land mines in Cambodia. The rodent won the animal equivalent of Britain's highest civilian honor for bravery in September 2020. (Photo: AFP/PDSA)

Cambodia’s famed “HeroRAT” Magawa has died in retirement after spending most of his eight years working with de-miners and sniffing out land mines and unexploded ordnance.

The giant African pouched rat made the Guinness World Records book for “most land mines detected by a rat” with an official tally of 71 mines and 38 unexploded ordnance units, which potentially saved many lives.

Ly Thuch, first vice-president of the Cambodian Mine Action and Victim Assistance Authority, told the Phnom Penh Post he was saddened to hear of Magawa’s death.

He noted that Dutch de-mining operator Anti-Persoonsmijnen Ontmijnende Product Ontwikkeling (APOPO) had trained rats to assist their staff in mine clearance work in Cambodia with great success over the years.

“They made a huge contribution to mine clearance in Cambodia. Magawa alone contributed a lot and had many achievements which APOPO and everyone working in the field should be proud of. We are genuinely saddened by Magawa’s death,” he said.

Magawa was originally from Tanzania and had helped clear mines from about 225,000 square meters of land — the equivalent of 42 football pitches — over the course of his career.

When the rats find a mine, they signal to their handler by scratching at the earth above it

He could cover an area the size of a tennis court in 30 minutes, something that would take four days using a conventional metal detector.

In September 2020, the rodent won the animal equivalent of Britain’s highest civilian honor for bravery “because of his uncanny knack for uncovering land mines and unexploded ordnance,” The Guardian reported.

The BBC noted Magawa was retired in June last year after "slowing down" as he reached old age, while The New York Times said his work had won him hearts around the world.

“When the rats find a mine, they signal to their handler by scratching at the earth above it. Their light weight means they are able to avoid detonating mines, unlike humans, so there is minimal risk of injury,” The New York Times added.

Cambodia remains one of the world’s most mined countries. Unexploded ordnance is scattered around the country, the legacy of a 30-year war.

Just under half of the contaminated land — 1,893 square kilometers — has been cleared of explosive remnants of war since de-miners were first deployed in 1994.

In August last year, authorities announced Cambodia would bolster its de-mining force by 2,000 men and women and deploy a broad strategy to clear the country of all land mines and unexploded ordnance by 2025 with the backing of the United Nations Development Programme.

Australia, New Zealand, South Korea, Switzerland and the United States are backing the effort with extra funds to help train and kit out 2,000 soldiers from the Royal Cambodian Armed Forces.