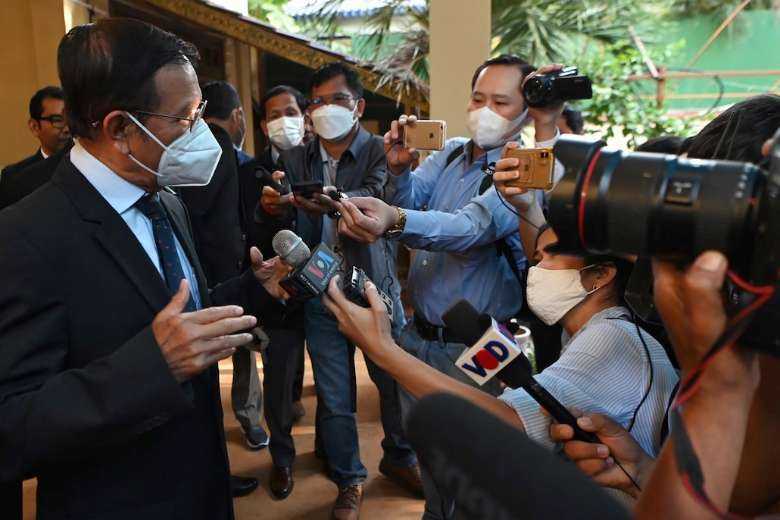 Kem Sokha, former leader of the now-dissolved Cambodia National Rescue Party, speaks to the media before going to Phnom Penh Municipal Court for the resumption of his trial on treason charges on Jan. 19. (Photo: AFP)

Cambodia’s opposition Candlelight Party has objected to a decision by the National Election Commission (NEC) to delete 150 of its candidates from contesting commune elections due to discrepancies in their application forms.

The NEC said the candidates had not completed the correct paperwork nor complied with the laws and some had falsified documents by forging fingerprints and signatures because they did not know how to read and write in Khmer.

“All decisions were made based on the facts and the law, so the NEC rejects any allegations,” NEC spokesman Hang Puthea told the government-friendly Khmer Times.

“Let the parties examine themselves to see if their parties have any problems in registering candidates. The decision of the NEC is fair and just and impartial to any political party.”

He said candidates from the Beehive Social Democratic Party (BSDP) and the Khmer Will Party (KWP) were also removed for similar reasons.

However, Candlelight Party supporters were dismayed by the decision and said the NEC had “not exercised its authority independently and impartially to ensure that the elections are free, fair and just in accordance with the principles of liberal, multi-party democracy.”

“Now it starts with deleting the entire list of candidates without a rule, creating more distrust when it comes to ballot counting”

The Candlelight Party has emerged as the leading opposition party and is largely made up of politicians and supporters of the outlawed Cambodian National Rescue Party (CNRP), which was dissolved by the courts in late 2017.

Its vice president, Son Chhay, told reporters that local authorities had created obstacles for opposition parties which infringed on their political rights but the Candlelight Party would continue to fight for its candidates at the June 5 polls.

“We will not keep quiet, we advocate, we demand for the situation to be improved, we will join the polls,” he said. “Now it starts with deleting the entire list of candidates without a rule, creating more distrust when it comes to ballot counting.”

The long-ruling Cambodian People’s Party (CPP) of Prime Minister Hun Sen is expected to field candidates in all 1,652 communes — clusters of three to 30 villages — while the Candlelight Party says it will contest 1,632 communes.

Candlelight Party candidate Oum Bonith said he was disappointed and concerned about the NEC’s removal of 18 candidates in his commune, adding that two had made errors in their applications but another 16 had not.

“They have enough knowledge to become a commune official and some of them can also read and write in English,” he said, adding that “the NEC should remove the names of any unsuitable candidates, but appropriate candidates should be allowed to participate in the commune and council elections.”

Candlelight Party officials have said they will consider boycotting the polls amid allegations of threats and intimidation by the CPP and the long-running trials of former CNRP members who face charges ranging from treason to incitement and are currently before the courts.

The CPP has rejected those allegations.