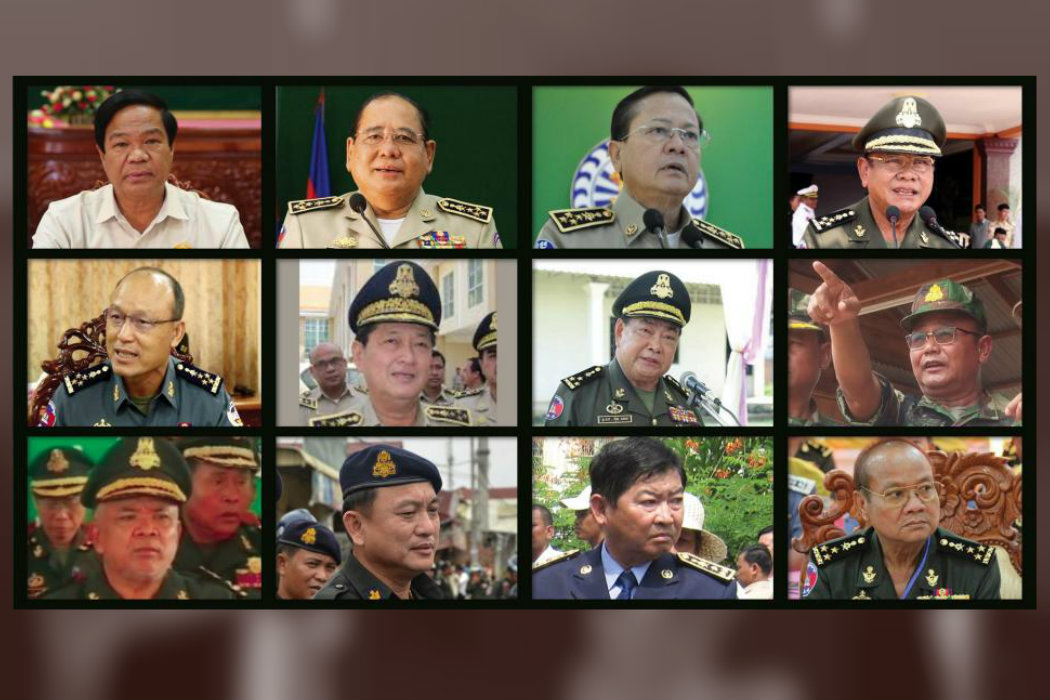 Cambodia's descent into dictatorship under Prime Minister Hun Sen had been facilitated by a dozen "dirty" senior security officers accused of a slew of major human rights violations, Human Rights Watch claims in a new report.

The findings were immediately rejected by a spokesman for the Cambodian government, who accused its author of having a personal vendetta against Hun Sen.

'Cambodia's Dirty Dozen: A Long History of Rights Abuses by Hun Sen's Generals' accuses leading officials in the army, gendarmerie and police of acting as a "Praetorian Guard" for Hun Sen by ruthlessly suppressing his opponents.

"The abuses in which the 12 are implicated include violations of human rights, war crimes, and crimes against humanity committed from the 1970s to the present," the June 28 report of the international rights' monitoring organisation states.

"Given their past record and current positions, Hun Sen can rely upon these 12 commanders and their subordinates to commit human rights abuses whenever it is considered necessary, including for their own power and economic interests," it says.

The list includes Pol Saroeun, Supreme Commander of the Royal Cambodian Armed Forces, his deputy, Kun Kim, and General Neth Savoeun, supreme commander of the Cambodian national police. Like Hun Sen, several of the officials on the list were members of the Khmer Rouge, the ultra-communists responsible for the deaths of an estimated 1.7 million Cambodians in the 1970s.

A long list of crimes are alleged in the mammoth 213-page report, citing orders to "sweep" away royalist opposition officers in the 1990s, a common Khmer Rouge euphemism for execution, extrajudicial killings during the 1980s, and the gunning down of anti-government protesters in January 2014.

The premier had promoted these officers "based on loyalty to him instead of the institutions they formally serve, such as the military, gendarmerie, and police."

Hun Sen has been accused of turning Cambodia into a de facto one-party state ahead of looming July 29 elections after his only realistic rival, the Cambodia National Rescue Party, was dissolved last year over widely discredited accusations it was planning to wage a United States-backed revolution. Its leader, Kem Sokha, is facing up to 30 years in prison for alleged treason.

The outlawing of the CNRP comes amid a crackdown on independent media and civil society that has seen The Cambodia Daily, Radio Free Asia and local independent radio stations shut down. Dozens of opposition politicians, activists, and journalists are behind bars or in exile. Hun Sen's inner circle had been at the forefront of implementing the recent oppression, said Brad Adams, Asia director at Human Rights Watch.

"The importance of Cambodia's generals has become even more apparent ahead of July's elections, as they engage in crackdowns against journalists, political opponents, and anti-government protesters — and openly campaign for Hun Sen," Adams said in a media release.

Government spokesman Phay Siphan said he believed Adams was biased against the Cambodian government and that the report was based on "fake" claims.

Human Rights Watch was very subjective and had "harassed" the government for many years, Siphan told ucanews.com.

Besides that, Adams played a role beyond the legitimate activities of an NGO, Siphan added.

"He incites the people, Cambodian-Americans as well as American lawmakers, to work against Cambodia especially during the general election campaign," he said.

Siphan declined to comment on who he thought Adams was working on behalf of but added that efforts to paint those named in the HRW report as being Khmer Rouge were wrong.

"Those people are saviors, they saved people from Khmer Rouge killing," he said.

"They are not enemies of the Cambodian people."

The report comes after the U.S. earlier this month imposed sanctions on Hing Bun Hieng, the chief of Hun Sen's bodyguard unit, and for the first time directly implicated the general in a 1997 grenade attack on opposition supporters.

"U.S. sanctions on one of Hun Sen's top generals and closest confidantes for recent abuses and a two-decade-old grenade attack on the opposition should serve as a wake-up call to officials and commanders," Adams said.

"Hun Sen won't be able to protect them forever if they commit atrocities against Cambodians."