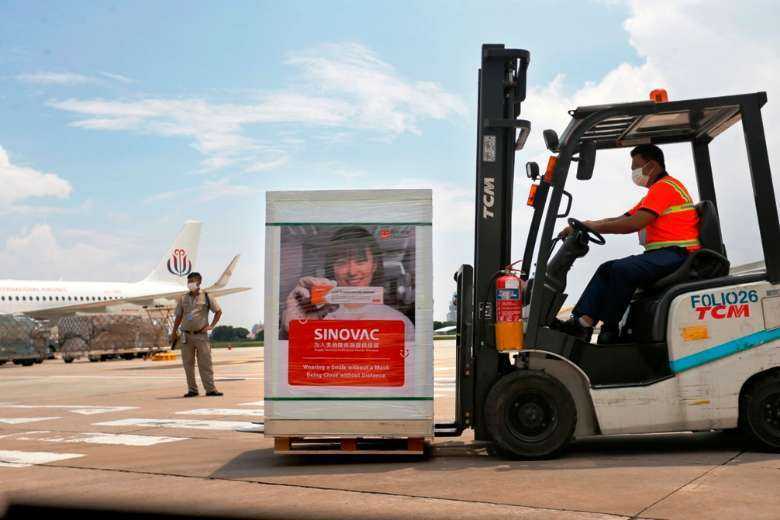 A batch of doses of China's Sinovac Covid-19 vaccine arrives at the international airport in Phnom Penh, Cambodia, on Sept. 28. (Photo: AFP)

A sharp drop in the daily number of Covid-19 cases has been recorded in Cambodia following a change in testing strategy coinciding with Prime Minister Hun Sen’s message that Cambodians must learn to live with the pandemic and accept a high death rate.

According to Voice of Democracy (VoD), Hun Sen sent an audio message to his officials last week about “learning to live with Covid-19” by ending widespread rapid testing.

Hun Sen said only people who show symptoms should be tested, a policy that would amount to an apparent end to contact tracing.

“For those who do not have any problems, we don’t need to do a rapid test for them because this is the way of learning to live with Covid-19. Otherwise, their noses will be damaged,” he said in the audio message, VoD reported.

Rapid testing was conducted in areas of major outbreaks such as markets and at border crossings and cross-checked with PCR (polymerase chain reaction) laboratory tests.

VoD and other media organizations have now sought clarification from the health ministry.

Cambodia has recorded 113,475 infections so far, with 219 on Oct. 4. All 2,406 deaths have been recorded since Feb. 20 when a breach in quarantine resulted in a major outbreak of the disease.

However, the country has been widely praised for its vaccination rollout. More than 80 percent of the population have received their first jab and more than 65 percent are fully vaccinated.

Provincial lockdowns, highway checkpoints and travel restrictions have also ended and this has raised hopes among some that Cambodia’s shattered economy will soon reopen to international tourists.

In a piece published by the government-friendly Khmer Times, an official who declined identity essentially dismissed the numbers as irrelevant and said that rapid testing had been abandoned due to changing attitudes.

“It is expediency and semantics when it comes to reporting the daily numbers. Covid-19 fatigue has set in among the people at large and even among some public establishments,” the official said.

He further said that attitudes have changed but one must not be mistaken. Vigilance is high but fatigue from close to two years of precautions and restrictions has pushed people to a new level of trying to live life in their own way of new normal.

“This is why rapid tests have been disbanded,” the official said. “Thus, PCR or rapid tests, people must get used to the fact that death figures may remain for some time before they taper off.”