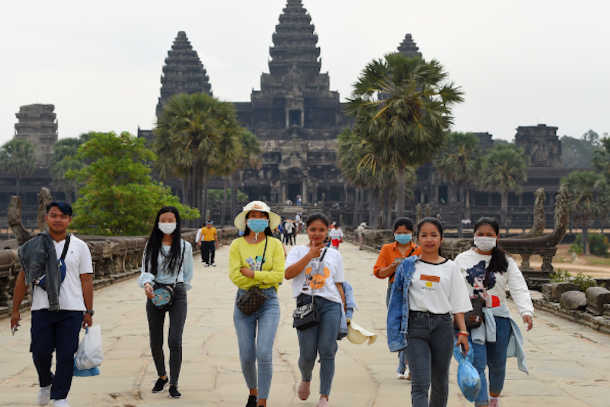 Tourists wear face masks amid concerns about the spread of the coronavirus as they visit the Angkor Wat temple complex in Siem Reap on March 6. (Photo: Tang Chhin Sothy/AFP)

Cambodia has declared all 122 patients who contracted Covid-19 have recovered from the highly contagious and potentially deadly virus amid speculation the government will soon end lockdown laws and reopen its borders.

“Cambodia reported no new case of Covid-19 on Saturday, while the 122nd patient has recovered,” the Health Ministry said in a statement. “To date, all 122 Covid-19 positive patients in Cambodia have recovered.”

The low rates of coronavirus contraction have baffled health officials. Although Cambodians are suspicious of official figures, there have been no reports from Cambodia’s savvy online public of spikes in unaccounted deaths in provinces or cities.

One doctor, who declined to be named, said the quick closure of Cambodia’s borders was the main reason behind low Covid-19 rates. Others say high temperatures, low use of recycled air and a population in which most people are under the age of 25 had all contributed to its success.

“I have not seen a case of Covid-19 in three or four weeks,” said the doctor, who works in a major international hospital.

Cambodia’s economy has suffered since the 2018 election when the main opposition party was banned and the country was returned to a one-party state.

Western businesses left amid the arrival of large-scale Chinese investors, while the European Union partially withdrew trade preferences and is now considering adding Cambodia to a blacklist of countries and sanctions known for money laundering.

Covid-19 has compounded the kingdom’s economic issues, particularly among those heavily indebted to microfinance companies, and businesses are keen to reopen as soon as possible despite the Health Ministry warning that a second wave of the pandemic is still a real threat.

Whether an easing in restrictions will result in a scrapping of the emergency powers instigated by the government on April 29 as part of its efforts in combating the virus remains to be seen.

US-based Human Rights Watch (HRW) has accused the Cambodian government, and others in the region, of detaining activists and opposition leaders in the name of fighting the outbreak.

“Peaceful political activity and criticizing the government are not crimes, including during a pandemic.”