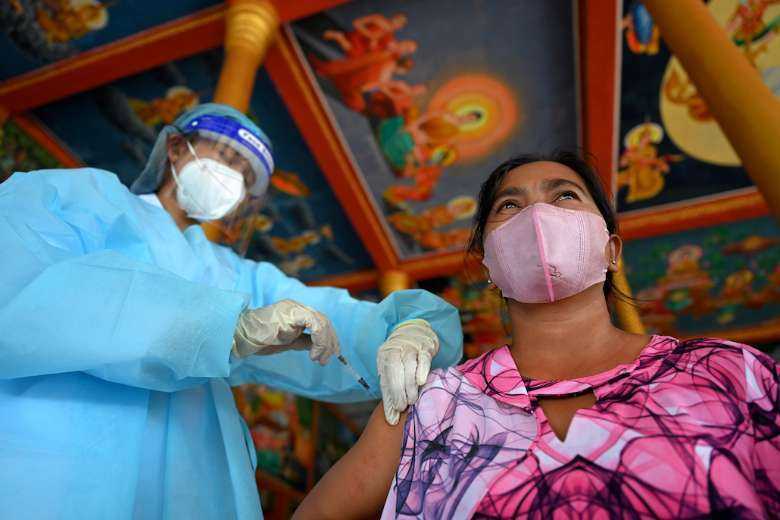 A woman receives China's Sinopharm Covid-19 vaccine at a pagoda in Kandal province on June 10 as part of the Cambodian government's campaign to halt the rising number of cases. (Photo: AFP)

Signs are emerging that Cambodia’s rapid vaccination rollout is having an impact with the daily number of confirmed cases falling slightly, but infection rates remain high and the death toll continues to climb with the full impact of the Delta strain yet to hit.

The seven-day average fell to 856 this week from a peak of 960 on July 7, with the daily figure consistently under 900 cases.

But there are signs that the country’s health system is overstressed, with warnings from Health Ministry secretary of state Mov Kang that lockdowns could be reimposed if people and some businesses, particularly bars, continue to flout laws designed to curb the pandemic.

“To be able to cut off the infection or to end the February 20 Community Event depends on people’s participation in the implementation of health measures, especially for the relevant authorities to inspect the places in areas with karaoke or drinking spots,” Mov Kang said.

He was referring to a break in quarantine on Feb. 20 which resulted in the spread of the Alpha variant. All 1,222 deaths have been recorded since then, with the number of Covid-19 cases spiraling to 71,244 from less than 500.

Mov Kang said imported Covid-19 cases, including the Delta strain, were threatening border provinces where migrant workers returning from Thailand had tested positive for the disease.

In the capital, security has been beefed up with military and police conducting raids in what remains of Phnom Penh’s once bustling nightlife districts.

The economy has been smashed by the pandemic and Minister of Planning Chhay Than has said more than six million workers in the informal economy have either lost or are expected to lose their jobs due to Covid-19.

He said hardest hit were the tourism, export manufacturing and construction sectors, which together contribute more than 70 percent to economic growth and employ almost 40 percent of the workforce in a country of 16.5 million people.

“Because of the transmission of Covid-19, nearly 3,000 businesses in the tourism sector have suspended activities, leading to a loss of 45,000 jobs,” Chhay Than said. “Workers in the informal sector, estimated to be 6.1 million people, have lost or will lose their jobs.”

Rising infections and the costs incurred by the pandemic have prompted some rare criticism of the authorities inside Cambodia.

Ministry of Health spokesperson Dr. Or Vandine recently reprimanded her critics, telling them “that if they could not help, they should not stir the waters or disrupt the treatment of Covid-19 patients.”