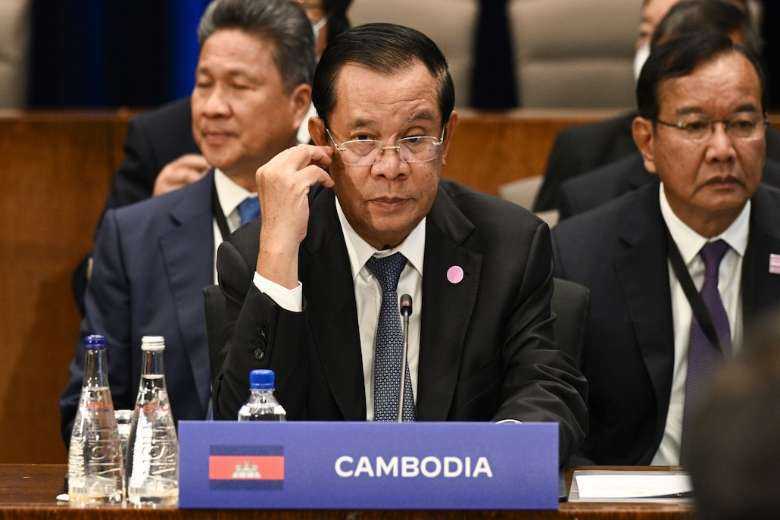 Cambodian Prime Minister Hun Sen takes part in the US-ASEAN Special Summit at the US State Department in Washington on May 13. (Photo: AFP)

Cambodians head to the polls on June 5 with much trepidation and some hope for free and fair commune elections despite the overarching dominance of the long-ruling Cambodian People’s Party (CPP) and Prime Minister Hun Sen.

About 82,700 candidates from 17 political parties are contesting more than 11,600 council seats in 1,662 communes — local administration positions in this country’s third tier of government with each commune made up of three to 30 villages.

Pok Ponlue, a 25-year-old monk, said he was leaning towards the Candlelight Party but added that local elections were rarely fair and simply designed to placate, with a “show the world” attitude that says Cambodians can vote.

The Candlelight Party was formed out of the remnants of the banned Cambodian National Rescue Party (CNRP). Its leaders have been accused of treason and inciting social unrest after an alleged attempt at rebellion aimed at toppling Hun Sen.

He said many people were too scared to vote because senior opposition figures were still being prosecuted through the courts while smaller political parties did not have the required resources to compete with the CPP.

“I’m thinking I will choose the Candlelight Party because I think this party has enough ability to compete with the CPP and they have enough members,” Pok Ponlue said, adding that it is more popular than others.

“We don’t know if the money is really going to the right people. This is the thing I always worry about. How do they choose the vulnerable?”

Voters have complained about a lack of transparency, while the National Elections Committee (NEC) has been accused of favoring the ruling CPP while disqualifying opposition candidates and delisting the National Heart Party amid allegations of fraud.

The NEC also said incorrect applications meant 150 Candlelight Party candidates could not compete but the party is fielding candidates in nearly all communes and analysts say it is emerging as the main opposition following the court dissolution of the CNRP in late 2017.

Opinion polls are banned in Cambodia, making it difficult to gauge public attitudes, but the CPP is taking this election seriously after announcing a range of initiatives.

They include the allocation of land to families who have lived by the Mekong River for more than 10 years, introduction of welfare payments to help the poor cope with the pandemic, and officials boasting zero Covid cases after a successful vaccination program.

Pok Ponlue applauded the safety welfare net but was wary about where the money was going. “We don’t know if the money is really going to the right people. This is the thing I always worry about. How do they choose the vulnerable?” he asked.

Muslim Chams, who were recently relocated inland from traditional fishing grounds around the Mekong River and its tributary, the Tonle Sap lake, were as uncertain about how they would vote as they were about their future.

The CPP has been sharply criticized by the United Nations and Washington, while the European Union has warned trade perks could be withdrawn if this election is not considered free and fair

“The government bought the houses for us but it is not a good area. It is too far and we cannot find any way to earn money there. That area is too dark, hot and has no wind. It is not as bright as where we used to live,” one elderly Cham woman said.

“If we live on the river, at least we can collect empty cans and earn a little bit of money for buying some rice and gas.”

The CPP has ruled Cambodia for more than four decades and is standing on its record of providing “peace and security” since ending a ruthless 30-year civil war in 1998. But it’s democratic record is far from perfect.

The banning of the CNRP enabled the CPP to win every seat contested at national elections in 2018. That resulted in Cambodia re-emerging as a one-party state for the first time in 25 years.

As a result, the CPP has been sharply criticized by the United Nations and Washington, while the European Union has warned trade perks could be withdrawn if this election is not considered free and fair. A CNRP supporter was murdered in November.

Horn Leakhena, a 22-year-old university student from the western city of Battambang, said she could not vote because the NEC made it too difficult for new voters to register. But she said she was hopeful this election would be cleaner than past efforts.

“I still see the same problems happening at every election, such as no transparency. But if we compare with the previous four or five mandates, I hope this time will be better. It is not going to be that fair but a bit better than in the past,” she said.

“We also had a hard situation but I did not receive government help. They help only their factions, not us. It is unfair and corruption always occurs among local officials"

Battambang was traditionally held by the CNRP but Horn Leakhena said that overcomplicated registration procedures and a lack of information meant her peers at university were also unable to cast their ballots.

“When they do the party propaganda, it is big and loud but they did not really focus on a voter registration campaign. There are many people who didn’t know how to register,” she said.

Horn Leakhena applauded government efforts to provide financial support to the poor during Covid-19 lockdowns but added that officials focused on regions that supported the CPP.

“We also had a hard situation but I did not receive government help. They help only their factions, not us. It is unfair and corruption always occurs among local officials. Senior officials should look harder and try their best to solve this corruption problem,” she said.

At the commune elections five years ago, the CPP won 50.76 percent of the overall vote while the CNRP scored 43.83 percent. None of the remaining 10 parties carried more than 2 percent.

Rath Thy, 28, from Prey Veng province in eastern Cambodia, said there were too many political parties and that made it difficult to follow campaigning, adding: “It feels like those smaller parties are just the flowers for decor in the garden of democracy.”

But there were standouts among them. “I can see some have a lot of supporters, such as the Grassroots Democracy Party and the League for Democracy Party,” he said, adding that he did not back any of the parties.

“People don’t trust politicians anymore because the political situation has been constantly changing and it has not been stable at all — not since the opposition party [CNRP] was dismissed,” he said.