Cambodians were lining up en masse for their first jabs of the Covid-19 vaccine on Feb. 10, with senior officials led by the prime minister’s eldest son, Lt. Gen. Hun Manet, and journalists at the head of the queue in Phnom Penh’s Calmette Hospital.

However, PM Hun Sen declined the Chinese-made Sinopharm vaccine after the first batch of 600,000 doses arrived on Feb. 7, saying it was found to have little effect on people over 60. As a result, the vaccination drive will focus on people aged 18-59.

“Before the vaccination, there were some comments about my absence from vaccination today due to my age. Some even used inappropriate words against me,” 68-year-old Hun Sen said.

“Today, my son has become the first to be vaccinated on behalf of his father, which also confirms our responsibility to our compatriots. Do not worry about where the vaccine comes from and which brand it is, but one should worry about not getting vaccinated.” 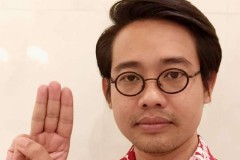