Cambodian Prime Minister Hun Sen lights a candle on June 21 as he prays at a spirit house during the 40th anniversary of his decision to defect from the Khmer Rouge army and cross into Vietnam. Hun Sen has recently gone abroad for unknown medical purposes, prompting speculation over his health. (Photo by Khem Sovannara/AFP)

Cambodian Prime Minister Hun Sen and his closest supporters have launched an aggressive campaign aimed at convincing a skeptical public that he has fully recovered from an undisclosed ailment after medical treatment in Singapore.

Impromptu appearances, online photos of Hun Sen getting out of a hospital bed, driving a car and going for a walk have been issued alongside statements talking-up his prospects.

"Is Hun Sen under medical emergency in hospital in France? Or is this the Hun Sen who Singaporean medical doctors have no ability to treat?" he asked a crowd of 10,000 earlier this week.

However, Hun Sen has declined to say exactly what he was being treated for, prompting speculation from within his own ruling Cambodian People's Party (CPP) that included ailments ranging from routine check-ups to cancer, heart surgery and issues with an ocular prosthesis.

Hun Sen also went to Singapore for treatment in January last year and this May when he was treated for extreme exhaustion. But his latest visit, which began on July 12, leading into an election year also led to criticism he had left the country unattended for too long, prompting an angry response.

"Do I need to tell all the people, especially a group of gangsters, that I was here or there?" the region's longest serving leader said.

"Wherever I am, I still have the ability to lead the country’s affairs, especially to crack down on the chaos caused by a group of gangsters, extremists and a group of traitors," he added.

It was vintage Hun Sen who has used threats of war to quell dissension within his ranks and broader discontent led by the opposition Cambodian National Rescue Party (CNRP).

Just before commune elections in June he stunned a rally of 4,000 Cambodian Christians when he said that the "only option is that the CPP must win elections at all stages" adding "to ensure the lives of millions of people, we are willing to eliminate 100 or 200 people."

Hun Sen has also warned Catholics that religious freedom would be lost if he was removed from office. 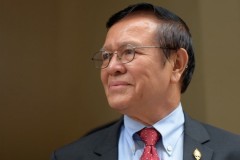 However, his tough stance has not been helped by well-meaning friends recently posting clumsy and unflattering photos of the prime minister online, which have only added to concerns about his health ahead of a ballot and sparked a series of online parodies.

Government and CNRP officials, fearful of Hun Sen's notorious wrath, have declined to comment publicly. One senior CNRP official said, on condition of anonymity, that the opposition preferred "to concentrate on more critical issues".

Hun Sen has cracked-down on dissent over the past year, criminalizing defamation laws and jailing his critics, opposition politicians and their supporters. There are also strict laws regarding cartoons and parodies in the country to the point that newspapers refuse to publish them.

Analysts said that has stifled debate at a critical juncture.

According to results from June's commune polls the CPP holds a slim lead over the CNRP in the popular vote, indicating the ruling party's popularity has failed to recover from a steady decline initially recorded at the 2013 general election.

"The CPP has its factions and is in a difficult situation," one analyst said on condition of anonymity. "Hun Sen's popularity is not what it once was and his health is now an issue. That is not a great combination heading into an election. If a week is a long time in politics then this year will seem like an eternity."