By the time unionists and the government had hashed out their latest disappointing minimum wage plan this week, workers at the Great Union (Cambodia) Garment Co. factory had already caught wind of the proposal.

Cambodia already has among the lowest average salaries in Southeast Asia, and months of campaigning by unions piled pressure on the government.

But it was to little avail. Workers learned they would receive just a $15 rise, nudging their monthly income to $95, instead of the $160 a month recommended by rights groups and labor experts.

It would take an entire five years, in fact, before the wage would reach that figure, according to the long-awaited plan rolled out on December 24 by the Ministry of Labor.

As workers shuffled out of the factory gates for lunch, their distress was palpable.

“Compared to inflation, $15 dollars more really cannot balance out. Everything is getting higher,” said Chhorn Chengly, 39, while a friend sombrely nodded in agreement.

“The rent, the food, the vegetables – everything costs more now. I won’t die from starvation, but I certainly can’t save any money.”

It is these conditions, experienced in near equal by hundreds of thousands of garment workers, that have led to repeated strikes and protests. But the wage raise announcement threatens a new level of unrest among an ever-more desperate population.

To be a garment worker is to very much live day to day. Chengly has worked in the industry for more than a decade. The job beats the far more precarious work of farming; but only just.

In order to make a living wage off of the current base minimum of $80 a month, Chengly works at least six days a week for between 10 and 12 hours a day. Some colleagues – especially young, single men – work seven days a week. 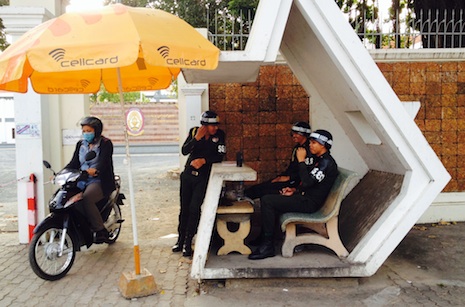 Losing the battle against endemic corruption in Cambodia The bulk of that money goes on food, which has been rising steadily in price for the past year, but has skyrocketed by up to 30 percent in the month since the government enacted a new customs policy. The rest goes on housing and her family, who live in another province and are raising her 12-year-old daughter.

Her other daughter, six, lives in Phnom Penh, where Chengly’s husband can look after her during the day before setting off for work at night. The situation is far from ideal, but the couple can’t afford to have both children living at home.

The wage policy signed off by the Labor Advisory Committee – a group that includes government, union, and factory representatives – came as a stark setback to workers hoping for a living wage. The first raise goes into effect in April 2014, with a $15 bump to be enacted each year until 2018. The move came, according to its statement, “following in-depth consultation and discussion”.

Denied a living wage yet again, the ranks of striking workers have swollen since Tuesday. The opposition party has been quick to jump on the strikers’ cause – leading thousands of them in marches across the capital and further afield.

Khun Tharo, a program officer at Solidarity Center/ACILS, said that unless the government moves swiftly to negotiate a solution, protests are quickly going to get “out of control.”

“It’s going to be widespread. I think it’s going to lead to labor unrest in this country.”

According to Tharo, nearly 80 factories are already striking. That represents a significant proportion of the country’s estimated 400,000 workers who are employed across some 400 factories.

Should striking expand, it could cripple the kingdom’s garment industry. The cornerstone of Cambodia’s economy, garment exports netted $4.44 billion last year and are on target to surpass $5 billion this year. A major producer for brands like H&M and Gap, work stoppages could have ripple effects on a global supply chain.

Workers, aware of the leverage that they hold in this situation, have been pushing their case with roadblocks and mass marches. At Freedom Park – the epicenter of an ongoing election-related protest carried out by the opposition party – thousands of workers have begun gathering to vent their frustrations.

The strikes, said Tharo, have “not yet led to serious violence. But if the government tries to postpone this [negotiation] process, it’s going to lead to violence.”

Fearing such violence, the Garment Manufacturers Association in Cambodia (GMAC) on Thursday morning advised its 400-plus member factories to consider shutting down.

In a letter obtained by UCAN, the association urged that factories stop operation for the “whole of this week”.

But despite GMAC's wish to pretend otherwise, the workers who have begun turning out en masse are coerced by no one. They are, instead, being forced into the streets by simple economics.