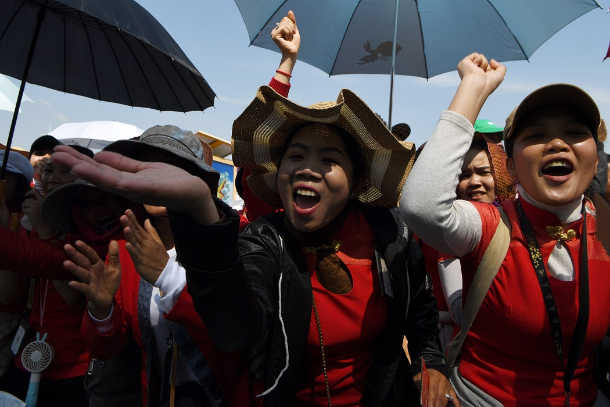 People shout slogans in front of NagaWorld hotel and casino during a protest in Phnom Penh on Jan. 10. (Photo by Tang Chhin Sothy/AFP)

Cambodia’s poorly paid took on a multi-billionaire, with some 3,000 workers going on strike and demanding higher salaries in a rare show of defiance in this authoritarian country, which is dogged by an ever-widening wealth gap.

Workers at NagaCasino began the strike on Jan. 10 demanding a higher minimum wage starting at US$300 per month for hotel staff and US$500 for those working on the gambling floor. They defied an injunction issued by the Phnom Penh Municipal Court, which warned any strike would be a serious offense. The court on Jan. 8 also ordered workers not to proceed with the strike.

Hotel workers are currently paid between US$191 and US$230 a month, while on the floor, gambling staff receive between US$230 and US$370 at a casino owned by Chen Lip Keong, a Malaysian businessman whose worth has been estimated by Forbes magazine at US$6.3 billion. About 2,000 workers protested outside the casino after talks between Naga, and the Khmer Employees’ Labour Rights Support Union of NagaWorld failed to resolve the dispute despite mediation by Cambodia’s Labor Ministry.

Striking workers bitterly complained about being forced to live in dormitories and being unable to afford to have their families with them while NagaCasino, which enjoys a monopoly on gambling within a 200-kilometer exclusivity zone around the capital, racked-up enormous profits.

Ek Bopha, 28, a dealer at the casino, told the online news portal cambojanews.com the workers were well aware the casino could afford higher salaries.

“They make more and more in profit every year,” she said.

Ter Monika, another dealer, said she had worked at the casino for eight years and was pregnant with her second child and was surviving without a living wage.

“I already have difficulty providing for one child because the cost of living keeps increasing. I still rent a dorm room; I’m still not able to have my own house for my kids,” Monika said. NagaCorp recently announced a US$4 billion expansion following a US$390 million profit in 2018, up 53 percent year on year. “I allowed them their freedom of expression, as long as they don’t block traffic for the public,” Phnom Penh governor Khuong Sreng told reporters.

He also said, “as parents, we don’t want to see our kids fight.”

Unions are also seeking the reinstatement of Chhim Sithar, who was suspended after printing T-shirts with a Khmer slogan that translates to “The company is growing; workers need living wages.”

She distributed them to 3,000 employees but was suspended along with 27 others. She was told the T-shirts could damage Naga’s image and that it had violated internal policies.

The 27 others were reinstated but Chhim Sithar was not. Strikes had become rarer in Cambodia since elections in July 2018 when the main political opposition party was banned, and the Cambodian People’s Party won every seat in parliament amid an international outcry, particularly in the West. As a result, the United States is now threatening sanctions, and the European Union is considering the withdrawal of trade preferences.