Parents awarded up to $20,000 in compensation by importer of Nutrilatt milk powder after babies fell ill 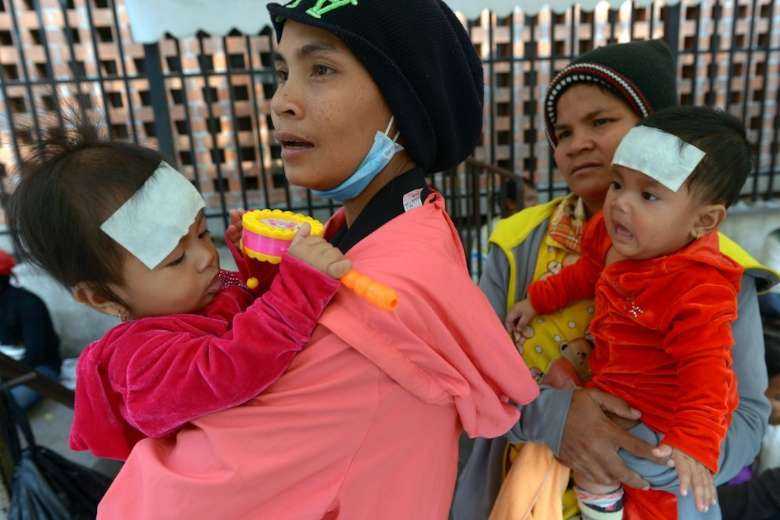 Cambodian women with their babies in front of Kantha Bopha Hospital in Phnom Penh. (Photo: AFP)

Twenty-two Cambodian parents will be paid between US$10,000 and $20,000 each after a businesswoman sold them poor-quality milk powder that made their babies sick, ending a two-year court battle which according to one mother was full of “pain and sorrow.”

Khon Keokesey was sentenced to 10 months in prison after the Consumer Protection and Fraud Repression Department found that six batches of Nutrilatt formula milk powder were iron deficient, resulting in the infants becoming ill.

Phnom Penh Municipal Court ordered her to pay 22 parents of 24 infants the compensation, which fell short of expectations. Parents had sought between $220,000 and $300,000 but said they would accept the decision as they wanted an end to the issue.

“The case has dragged on for two years and I decided to accept the compensation although it doesn’t meet my expectations,” mother Chan Phalkun said. “The court decided in accordance with the facts and evidence, and I suppose it cannot go beyond the $10,000 and $20,000.”

Khon Keokesey was charged with false or fraudulent advertising under Articles 21 and 63 of the Law on the Management of Quality and Safety of Products and Services.

The court heard that the use of very low levels of iron and zinc in the milk products was not good for children and could cause them to become anaemic and susceptible to disease.

“I advertised the milk as quality products because I trusted the Malaysian company’s certificate. But I did not know that the quality of milk products was not as advertised until my customers decided to sue me”

“It’s difficult when I have to attend the court case which has been going on for two years as I also have my work to look into. I am happy that the court has made its verdict,” Yuth Rithy, who accepted $13,000 in compensation, told the Khmer Times.

The payouts were the equivalent of around 10 years' average pay in Cambodia where gross domestic product per capita is about $1,500 a year.

Khon Keokesey told the judge that her company had imported milk products for about a decade from a Malaysia-based factory without problems and that the products had been certified by Cambodian authorities.

“I advertised the milk as quality products because I trusted the Malaysian company’s certificate,” she told the court. “But I did not know that the quality of milk products was not as advertised until my customers decided to sue me.”

A mother of twins, Liv Samnang, had demanded $300,000 in compensation and said she would accept the court’s verdict but added the jail sentence imposed on the importer was too lenient because she had caused so many children to fall sick.

“I can now concentrate on my twins. I am accepting the compensation as it is time to forgive, forget and move on with the lesson learnt,” she said.