Virgin forest and centuries of tradition at stake in remote valley 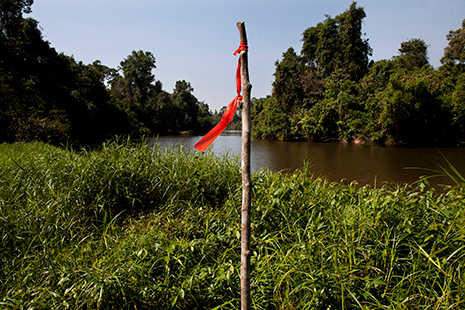 For much of the past six weeks, a handful of guards have stood watch at the edge of the long, red dirt road leading into southwestern Cambodia’s remote Areng Valley.

Sixteen kilometers away, ethnic minority Chong villagers remain at home waiting for an alert. When word of an attempted incursion comes, they will rush and join their comrades at the gates.

In recent weeks they have repeatedly blocked workers of Chinese firm Sinohydro from entering the valley to work on a controversial dam and research mining opportunities in the area.

“When they hear the Chinese are coming they send people back to the village to come [help block the road],” said Alejandro Gonzalez-Davidson, the head of Mother Nature, an NGO that is assisting the villagers. “It’s really important to have these eyes on the ground and I think it diffuses the possibility of violence. If [workers] go in, it could get violent if people feel the need to protect their home.”

For now, this is the best bet the community has against the growing threat against their land, forests and nearly 1,000 years of tradition.

Villagers have been locked in a battle with Chinese developers and the Cambodian government since plans for a 108-megawatt hydropower dam were announced in 2006.

Ownership of the project has switched hands multiple times, with at least one developer saying there was not enough water to make the project feasible. In February, Minister of Mines Suy Sem signed off on a six month research license for exploratory mining in the resource-rich area.

The land – 20,000 hectares of which would be flooded by a dam – remains one of the most biodiverse areas in Asia. Conservationists and locals alike fear the dam project represents little more than a cover for rampant logging and mineral extraction.

“Who is the real person who develops Areng? And what does he really want – electricity or the surrounding nature?” asked Heng Samnang, the leader of a youth group that has been heavily involved in assisting the villagers and publicizing the situation, speaking at a conference on the dam in Phnom Penh on Monday. “The police say that the people who block the road break the law, but we don’t. We are just protecting the forest. There’s no law saying people can’t protect the forest.”

Located inside the Central Cardamom Protected Forest – a conservation area of more than 400,000 hectares that spans three provinces – the Areng Valley is one of Cambodia’s last untapped forests.

In recent years, hundreds of thousands of hectares of protected Cambodian land has been turned over to local and foreign developers for agribusiness, hydropower and construction projects.

In Areng, home to dozens of rare species, the destruction of the valley could lead to the extinction of the Siamese crocodile and pose risks to tigers, Asian elephants, pileated gibbons and the Asian arowana fish, according to  International Rivers, a California-based environment and human rights NGO.

Less measurable is the destruction the dam will inflict on ancestral lands and spirit forests that play an integral role in the lives of the estimated 600 Chong families living in the valley. While the government likes to paint such projects as important to the development of rural communities, villagers are quick to point out the attendant hypocrisy.

“I don’t want the dam and I ask the government to please save Areng,” said villager Has Ley. “If Sinohydro makes this dam, it will destroy all the homes, land and trees. In the rainy season, it will flood and the animals will have no habitat because of the catchment. Now, I can grow rice, plants, and catch fish – it’s all there. If I am forced to move, I don’t know how long it will take before I can plant again.”

Youth groups and monks, along with the NGO Mother Nature, have pushed a dual education campaign, training villagers on their rights while raising awareness of the valley’s unique traits among Phnom Penh’s middle-class students.

Turning these programs into concrete action, however, has proved difficult. At Monday’s workshop in the Cambodian capital, a youth group leader implored youngsters to “help us. Don’t just share the news on Facebook, actually join us.”

Inside the valley, meanwhile, it has quickly become apparent that educating villagers will not insulate them from the encroachment problems. When villagers refused to thumbprint a resettlement agreement, the company simply returned and tricked people into giving their OK after claiming the document was a measurement of how much land they occupied, said Gonzalez-Davidson.

“I’m worried about the people in Areng,” said Oun Long, a monk who has been heavily involved in the case. “They don’t have a high education, and they don’t know about the laws. That’s why we go there to help educate people.”

For those living in Areng, however, it is not particularly complex to understand.

“If Sinohydro builds the dam, it will destroy nature,” said community leader Ven Vorn. Meanwhile, “the electricity isn’t a big amount. The [development] cost is US$400 million but the dam will just produce 108 megawatts. So we think they must not want hydropower, they just want logs and mines."