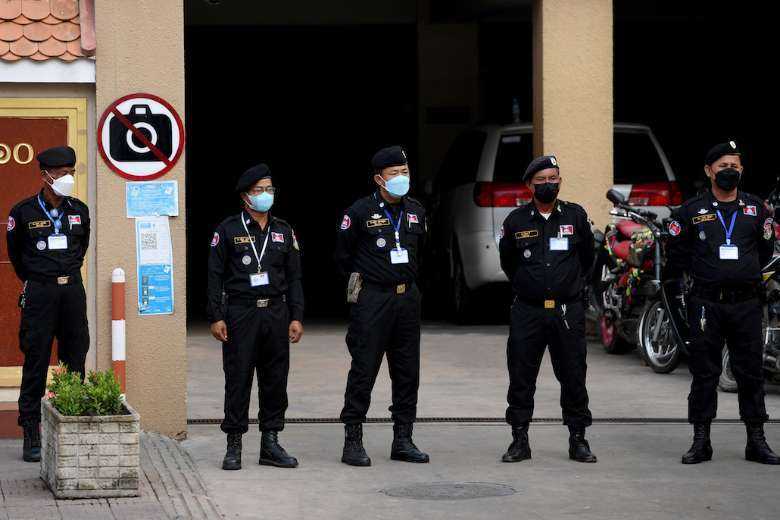 A court in Cambodia has sentenced trade unionist Rong Chhun to two years in jail on charges of incitement to disturb social stability.

Chhun, the outspoken president of the independent Cambodian Confederation of Unions, had been charged after he issued a statement claiming that Cambodia was ceding border territory to Vietnam, a potentially explosive issue in this country.

He was also fined about US$100,000 in damages and sentenced alongside Sar Kanika and Ton Nimol, who, Rong Chhun claimed, were not political activists but a market vendor and a tuk-tuk driver who were caught up in protests.

The three defendants, charged under articles 494 and 495 of Cambodia’s penal code, reacted to the court’s decision on Aug. 18 by shouting that the verdict was unjust, reported Voice of Democracy.

“It is injustice,” Rong Chhun said in the courtroom. “It is implemented based on a plan and order from the ruler. The court is under the influence of a politician, so the court cannot find justice for me.”

Sar Kanika and Ton Nimol had allegedly protested outside the court in support of Rong Chhun and were also fined $100,000 and sentenced to 20 months behind bars.

Hundreds of activists have been detained, charged with incitement and many jailed over the past year amid an outcry from human rights groups

The money is to be paid to the government’s Border Affairs Committee, which had accused the unionist of spreading “fake news” after he issued a statement on behalf of Cambodia Council Watch over the placement of border posts.

He claimed to have interviewed hundreds of farmers and the placement of border posts had resulted in the loss of hundreds of hectares of land belonging to Cambodian farmers.

Hundreds of activists have been detained, charged with incitement and many jailed over the past year amid an outcry from human rights groups over a government crackdown on dissent. They include environmentalists, trade unionists and members of the Cambodian National Rescue Party (CNRP), the main opposition party which was dissolved ahead of elections in 2018.

Protests have been rare ever since, but Rong Chhun’s arrest on July 31 last year sparked small nationalist and anti-Vietnamese demonstrations outside the court and elsewhere in the country.

Phil Roberston, deputy Asia director at Human Rights Watch, has said the arrest of Rong Chhun was the latest example of unrelenting government repression against activists who were trying to protect ordinary Cambodians’ basic rights.

“The European Union should add this outrage to the long list of rights abuses that need to be resolved,” he said.

“Foreign governments should publicly raise the plight of Rong Chhun and jointly appeal to the Cambodian government to put an end to this onslaught on human rights.”