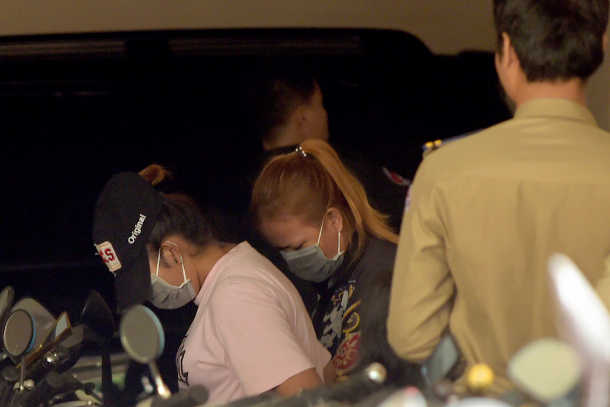 Srey Pech has only been seen once by her husband since she left for Phnom Penh five months ago to become a surrogate mother for the sum of US$10,000 as demand for babies continues to rise in countries like China and Thailand where the practice is illegal.

In Cambodia surrogacy exists in a legal gray area but is still heavily frowned upon. In contrast with neighboring Thailand, the country doesn't have a specific anti-surrogacy law but in recent years the government has started cracking down on the practice.

As such, the 24-year-old is still being detained at a police-run hospital in the capital after security forces raided the clinic that assisted her on June 23.

Police arrested 32 women who were accused of conceiving babies to sell to Chinese families. Five staff at the clinic including a Chinese manager were also taken into custody.

A Cambodian court charged them with planning to traffic babies to foreign countries, but their sentences are still being decided.

Srey Pech's husband, who only gave his name as "Sophat" for fear of repercussions, said he tried to dissuade her from traveling to Phnom Penh due to legal concerns.

Yet she left Kratie province convinced she would escape the long arm of the law with the support of government officials suspected of graft, he said.

"She told me not to worry about it because the agency helping her was protected by a high-ranking official," he told ucanews.com.

"I only found out she'd decided to go ahead and do it after she was three or four weeks' pregnant," he added.

According to the latest legal edicts, any babies born before Jan. 8 of this year have been allowed to leave the country, but only if the adopting parents could prove they had received permission from the Phnom Penh Municipal Court.

Anyone involved in sending babies born after that date to another country is subject to Cambodia's Human Trafficking Law, which threatens jail terms of seven to 14 years for violators.

Sophat said he has only visited his wife once since she was detained.

"We live far away from the hospital so it takes us six or seven hours to get there. Last time I had to wait hours to see her, and then we were only given 15 minutes together," he said.

"My wife first told me she expected to be released in August. Then it was delayed until September, then October. Now she's five months' pregnant and we don't know when — or if — she'll be set free."

Sophat's mother, Pheap, said the family was in dire straits financially and Srey Pech had reached her wit's end after trying various ways to generate some income.

"She tried very hard to help the family," the elderly lady said. "Sometimes she'd go and wash the clothes of other villagers just to earn some extra money. She had plans to build a house for her family so we wouldn't all have to live together in such cramped conditions," Pheap said.

"I cry constantly when I think of her," she added.

Surrogacy businesses aiming to meet demand in Asia are believed to have first pinned their attention on Cambodia in 2015.

It was around that time that Laos and Thailand banned the practice, making babies harder to source given the financial and bureaucratic onus associated with adopting babies from countries like India and the U.S.

In Cambodia a baby born to a surrogate mother can be purchased for as little as US$50,000, about half the going rate in India, according to media reports.

However public outrage sparked the authorities into action and an initial ban was announced in November 2016 despite this not being followed by a dedicated piece of legislation.

The "soft ban" led to the arrest of Australian nurse Tammy Davis-Charles and two Cambodians on human trafficking charges. They were sentenced to 18 months in prison for using falsified documents, such as birth certificates, and for acting as intermediaries between adoptive parents and pregnant women, the Phnom Penh Post reported. Australian national Tammy Davis-Charles is escorted by a Cambodian prison guard to the Court of Appeal in Phnom Penh on Jan. 8. Davis-Charles, jailed for 18 months for running a surrogacy clinic in Cambodia, had her sentence upheld in a prominent case highlighting the country's role in the lucrative trade. (Photo by Tang Chhin Sothy/AFP)

At the police-run hospital in Phnom Penh, a 24-year-old who gave the name "Lee" told ucanews.com recently that she had given birth to a baby boy three months earlier.

"I feel closer to him than I ever did to my first daughter, who was born when I was just 19," she said.

She recalls enduring a challenging delivery while chained to a bed in a maternity ward during her temporary release from the hospital where she and the other 31 women were being detained.

She was sent back there within a week, she said.

"My family is really looking forward to getting me back home, but I don't know when that will be. My grandmother misses me terrible. She cried when she heard they chained me to the bed," Lee said.

Chou Bun Eng, the vice chairman of Cambodia's National Committee of Anti-Human Trafficking, told ucanews.com she hopes to get the 32 women released on bail soon.

"They shouldn't be punished with the maximum sentence [of seven to 14 years in jail] because the actual crime of trafficking has not even been committed yet," she said.

A defense lawyer will submit documents to the court to prove the women are willing to take care of the babies themselves instead of having them adopted, she added.

Agape International Missions, an NGO that helps surrogate mothers, recently visited Lee's relatives. It asked them to sign a statement confirming Lee would keep the baby and they would help her to look after it.

Pheap and Sophat said they would both be happy to care for Srey Pech's unborn child.

"We'll take care of the baby," Sophat said. "I think Srey Pech didn't realize how dangerous surrogacy was. She accepted the money because there was no other way she could possibly earn that amount of money."