Cambodian students frequently forced to give up school for jobs 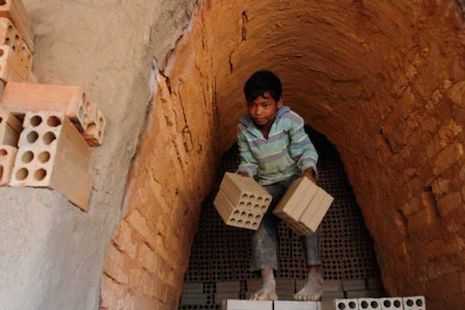 Almost a quarter of Cambodian students aged 7 to 14 are forced to give up school because their work intercedes, according to a new study by UNESCO.

Looking at what keeps kids from the classroom and why initiatives to get them back are stalling, the study found a high correlation between students who work and students who drop out.

“There are strong links between being a child labourer and being out of school and the two challenges must be addressed together,” says the report, titled Fixing the Broken Promise of Education for All.

With 10 percent of 7- to 14-year-olds classified as child laborers, Cambodia has more young children working than any country in the region with the exception of Timor-Leste.

And while the nation has drastically improved the number of primary school students registered, gross enrolment for secondary school has barely budged in the past decade. Last academic year, the percentage of students transitioning from primary to secondary school slid backwards, government statistics show. The dropout grade level and high child labor statistics relate, according to educators.

Many of the students who drop out before heading to secondary school are over-age for their grade after having entered school late, so that by the time they complete six years of primary classes, those from poor families feel pressured to work.

In a report published last year, the NGO Education Partnership found that half of the interviewed dropouts who left before secondary school were already 14-years-old or older.

“Factories attract students who are 15 or 16. There’s not proper enforcement of the labour laws, so students have to make a choice to economically contribute to their family or not,” said Chim Chanveasna, executive director of NEP.

The costs of textbooks, transportation to school and higher fees for informal classes are also compounded by another, less direct, financial burden: the absence of potential earnings. “For families, there are two types of costs to consider, the cost of sending the child to school and the cost of that child not being employed,” said Minister of Education Hang Chuon Naron.

Naron said the ministry is focusing on adding more scholarships, more schools and more incentives, such as vocational training and feeding programs.

But so far, the payoffs have been slow to materialize.

“In reality, when your family needs food, working becomes more [urgent] than school,” said Ros Sopheap, director of Gender and Development for Cambodia.

Original story: For many, work-school equation doesn’t add up