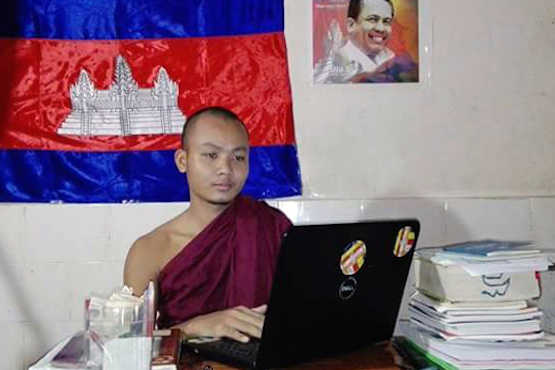 Undercover police in Cambodia have placed a temple in Battambang province under surveillance after activist monks based there demanded the release of a fellow monk arrested last week for posting a photo of himself on social media with a gun.

Lonh Sokchea, of the Independent Monk Network for Social Justice, told Radio Free Asia (RFA) that "several plainclothes police" have been "spying" on the temple since he and 50 other members of the group stages a protest outside the Battambang Provincial Court on June 22 to demand the release of Horn Sophanny. "We feel that our efforts to advocate peacefully for the release of our fellow monk Venerable Horn Sopanny are hamstrung and frustrated," he said, adding that he and other monks feel "intimidated and worried" by the police presence.

Deputy provincial police chief of Battambang Cheth Vanny on Tuesday dismissed Lonh Sokchea’s claim that police officers had been deployed to monitor monks at the temple.

"It’s not true — I haven't been informed of this," RFA quoted Battambang's deputy provincial police chief, Cheth Vanny, as saying.

Horn Sophanny, 24, posted a photo of himself in his monk’s robes with a gun on Facebook in April.

He also criticized the government, adding that the gun was real and would be used if Prime Minister Hun Sen's civil war threat — had his ruling Cambodian People’s Party (CPP) lost recent elections — came true.

The monk was arrested on June 21 for illegal possession of a weapon, according to authorities, but his fellow monks insist the gun was a toy and that Horn Sophanny was being targeted because of his political activism.