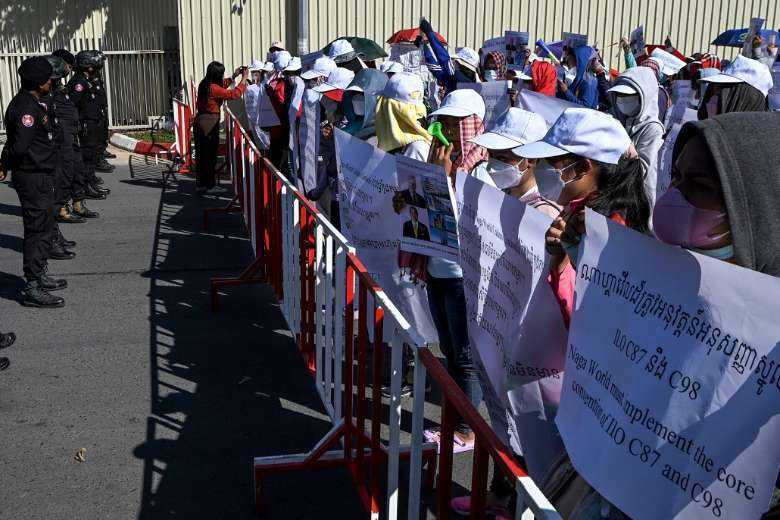 Police block workers from the NagaWorld casino taking part in a protest outside the National Assembly in Phnom Penh on Jan. 4 demanding the reinstatement of colleagues who were laid off last year. (Photo: AFP)

Cambodian authorities have claimed protests outside a Phnom Penh casino where workers are demanding the reinstatement of union leaders are being funded by foreign and local NGOs and have arrested a senior organizer.

Police said Chhim Sithar, leader of the protests in front of NagaWorld, was arrested and accused of inciting serious social unrest in violation of articles 494 and 495 of the penal code after repeated warnings to halt the demonstrations.

Another two union leaders, Sok Kongkea and Sok Narith, were also detained on Jan. 4. The three had been in hiding after being charged with inciting unlawful protests and their arrests prompted the US embassy into urging respect for the rights of workers.

“We are following closely the troubling arrests of NagaWorld union members for their peaceful expression and urge authorities to hear citizens, not silence them,” the embassy said in a statement. “Freedom of speech, assembly and association are guaranteed in the Cambodian constitution.”

About 2,000 striking workers have persistently protested outside the NagaWorld casino demanding the reinstatement of 365 union leaders and delegates who were laid off in April last year in what the company said was a necessary cost-cutting measure due to the pandemic.

At least 15 protesters have been arrested in recent days and charged with inciting riots and causing serious social unrest before Phnom Penh Municipal Court. The strike is now in its 19th day.

Sources told Radio Free Asia that pregnant women were among those arrested and had been taken by truck to the headquarters of Phnom Penh municipal police.

In a separate press conference, Phnom Penh deputy police commissioner Major General Bun Sosikha claimed protests — a rare event in Cambodia — were being funded by foreign and local NGOs after evidence was found on mobile phones and computers held by those detained.

“The authorities found several bank transactions made to the bank accounts of protest leader Chhim Sithar and entourages,” Sosikha said.

Deputy prosecutor Seng Hieng said that three transactions worth US$5,000 each were made and authorities believed further financial transfers had also been made. The source of the financing was not revealed.

The Cambodian government initially launched a crackdown on opposition dissent ahead of elections in 2018 and in November Prime Minister Hun Sen warned he “will do what it takes” to eliminate protests while hosting the ASEAN meet in 2022.

Claims of offshore funding for political purposes have been a constant in recent years and a source of irritation for the government, which has also claimed that opposition politicians in exile, backed by foreign money, were attempting to topple the government.