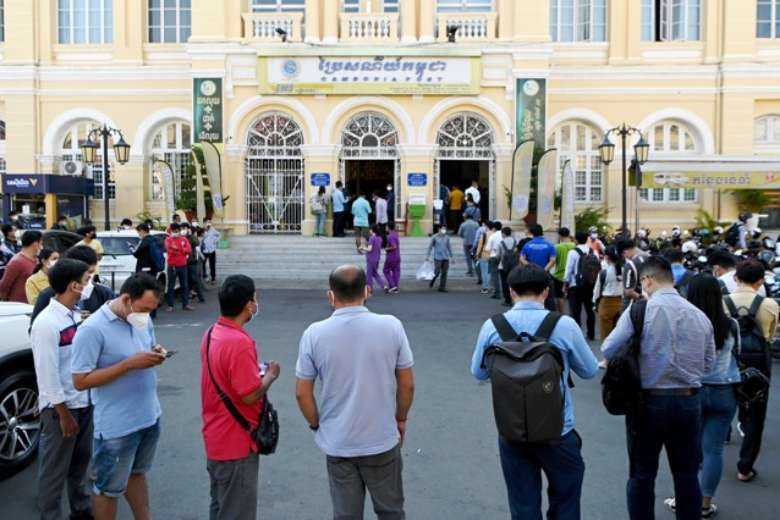 Cambodians line up outside a post office to buy rapid testing kits for coronavirus in Phnom Penh on Feb. 21 as the country sees a surge of cases from the Omicron variant. (Photo: AFP)

Cambodian Prime Minister Hun Sen has ruled out lockdowns in response to a surge in new cases of Covid-19 and health authorities warning of caseloads reaching “four digits” in the coming weeks.

Hun Sen reassured people that there will be “no city lockdown like in 2021 as the kingdom has achieved a high vaccination rate.”

He also announced that his daughter and five grandchildren had tested positive for the disease at the groundbreaking ceremony of a sewage treatment plant in Phnom Penh, the government-friendly Fresh News service reported.

Lockdowns in mid-2021 were harsh amid tight security and food shortages which ground the Southeast Asian nation’s economy to a crushing halt.

About three-fifths of Cambodia’s state savings of US$3.5 billion have been spent on combating the pandemic.

Omicron may seem to cause less serious symptoms than Delta, but the infection still remains dangerous, especially to the unvaccinated and to the vulnerable

The government had earned widespread praise for its initial handling of the pandemic and its rapid rollout of a vaccination program, achieving herd immunity in late October last year.

According to Our World in Data, 82.7 percent of the Cambodian population is fully vaccinated with two shots, 86.1 percent have received their first jab and 42.5 percent their third.

The government reopened the country to tourists and business in November while holding the chair of ASEAN in 2022.

But authorities have struggled to access the more remote and impoverished areas of the country, which is struggling with the Omicron variant that has also taken a heavy toll on neighboring Vietnam, Thailand and Laos.

Health Ministry spokeswoman Or Vandine said the Omicron variant was “actively circulating” across Cambodia and appealed to the public to strictly follow guidelines designed to curb the pandemic’s spread.

“The number of daily infections has resurged from a single digit [in mid-December] to two digits and has now reached triple digits, so if we all still do not comply with health measures properly, it will hit four digits soon,” she told reporters.

“People who test positive for Covid-19 can usually be cared for safely at home if they are not at high risk for severe disease and they have no or mild symptoms,” she said, adding vaccines alone will not end the pandemic.

“Omicron may seem to cause less serious symptoms than Delta, but the infection still remains dangerous, especially to the unvaccinated and to the vulnerable, such as the elderly and those suffering from chronic illnesses,” she said.