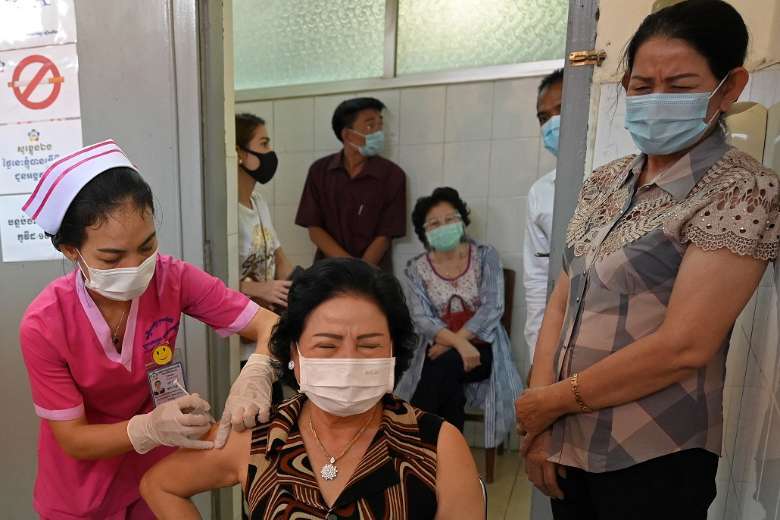 A woman receives the AstraZeneca coronavirus vaccine at a hospital in Phnom Penh on March 10. (Photo: AFP)

“The municipality is building crematoriums, and I have ordered provincial leaders across the country to take action,” he said, adding authorities had “to be prepared in the case of the death of people who are positive with Covid.”

The order was issued as the Health Ministry confirmed another 64 people had tested positive for the disease, taking the total number to 1,124 cases with 549 recoveries.

More than half of those cases were diagnosed after the “February 20 Event” blamed on four Chinese women who allegedly escaped quarantine after bribing security guards and went out partying.

One person diagnosed with Covid-19 has died but authorities insist the Chinese national was a drug addict who died from a heart attack caused by withdrawal symptoms while in quarantine.

All cases reported overnight were Chinese, Cambodians or Vietnamese from Sihanoukville, Kandal, Prey Veng, Siem Reap and Phnom Penh and are aged between 10 and 57. Prey Veng, bordering Vietnam, has been hardest hit in recent days.

According to Voice of Democracy (VoD), Hun Sen said all those who died in the country of Covid-19, regardless of background, would need to be cremated because there might not be enough land to bury them.

The decision was made to better control the potential corpses, seeing that the current Covid-19 outbreak had not dissipated, Hun Sen said, according to the VoD dispatch.

“This point is understandable — although some traditions do not allow cremation, in the case of Covid, we have to strictly do cremation because we do not have the land for burial, one corpse here, one corpse there,” Hun Sen said.

“Some countries use land and bury up to two or three [on top of each other] and families cannot visit. For us, the use of burning and cremation is an easy measure to manage.” 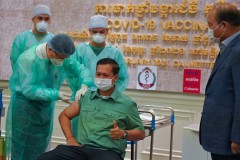 Phnom Penh governor Khuong Sreng said authorities were examining a 10-hectare plot of land in an isolated district of Kampong Speu province for construction of six crematoriums to meet the needs of Phnom Penh where 23 locations are locked down.

“The prime minister urges preparation, to be ready for cremation in event of incidents caused by Covid-19, so as not to lose control,” he said. “We will do this cremation according to technical specifications.”

Cambodia has initiated a vaccination program with the Chinese-made Sinopharm vaccine and the Covax-backed AstraZeneca which is mandated for people aged over 60.

However, the Health Ministry was forced to suspend AstraZeneca vaccinations in Phnom Penh, Kandal and Preah Sihanouk provinces after struggling to meet demand as thousands of people lined up to get inoculated.

Many Cambodians who worked in Phnom Penh have returned to their villages in the countryside since the latest spike, Cambodia’s third community outbreak.