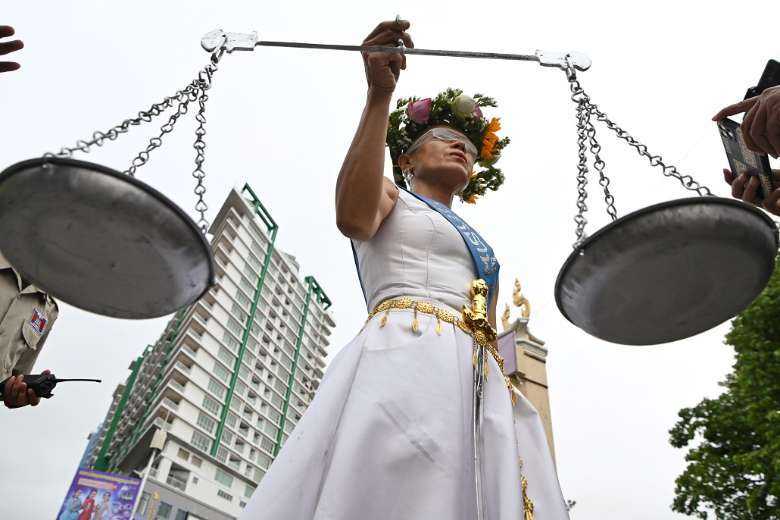 Theary Seng, a US-Cambodian lawyer and activist who is facing treason and incitement charges, poses as Lady Justice in front of Phnom Penh Municipal Court on May 3. (Photo: AFP)

The trial of 61 members of the outlawed Cambodian National Rescue Party (CNRP), who stand accused of attempting to overthrow the government, has concluded with prosecution and defense lawyers presenting their final arguments.

Deputy prosecutor Seng Hieng urged the judge at Phnom Penh Municipal Court to find all defendants guilty of incitement after they established an in-country task force and then launched a diplomatic strategy designed to oust the government in late 2019.

“We ask the judges to convict the defendants of conspiracy and incitement causing serious disturbance to society,” he said. “We request those who are currently bailed be arrested and punished according to the law.”

He said their strategy included a campaign in the international community calling for sanctions against the Cambodian government while attempting to win the support of the military and spreading misinformation on human rights, land disputes and the environment meant to enrage the public.

The CNRP was dissolved by the courts in late 2017 amid a crackdown on dissent over claims of electoral rigging. Two years later, leader in exile Sam Rainsy declared he would return to Cambodia and stage a popular uprising capable of ousting Prime Minister Hun Sen.

However, that attempt was thwarted when airlines denied him access to flights and hundreds of CNRP supporters were rounded up and subjected to mass trials.

“Let’s drop the crazy accusations against innocent people. The dictatorship cannot break my spirit. It is unjust when the law is not based on justice. My weapon is truth. Truth is eternal”

Lawyers for the defense asked for all charges to be dropped. They maintain that the charges were politically motivated and in their final arguments claimed the prosecution’s conclusions were not substantiated.

“This is worthless evidence,” defense lawyer Sam Sokong said. “And I would like the judges to drop the charges because there is no evidence to charge my clients and no evidence to reveal that activists lobbied the military.”

A verdict will be announced on June 14 after the June 5 commune elections which the CNRP cannot contest.

Among those at the court was Theary Seng. An American trained lawyer and a Khmer Bible editor, she protested outside the court dressed as Lady Justice in a white robe and holding the scales of justice. She was barred by security guards from entering the courtroom after refusing to relinquish the scales and a sword.

She said the decision to announce the verdict after the district elections indicated that the defendants would probably be jailed because that would attract unwanted international attention which the government did not want to deal with before the ballot.

“Let’s drop the crazy accusations against innocent people. The dictatorship cannot break my spirit. It is unjust when the law is not based on justice. My weapon is truth. Truth is eternal,” Theary Seng told reporters outside the court.

In a separate hearing, former CNRP activist Voeun Veasna appealed against his conviction and a one-year sentence, asking the court to drop incitement charges against him and free him from prison.

Prosecutors presented a video clip which they said appeared on Facebook where he severely criticized the government’s handling of the Covid-19 pandemic. However, Voeun Veasna told the appeals court the video was a fake and that the person in the video was not him.