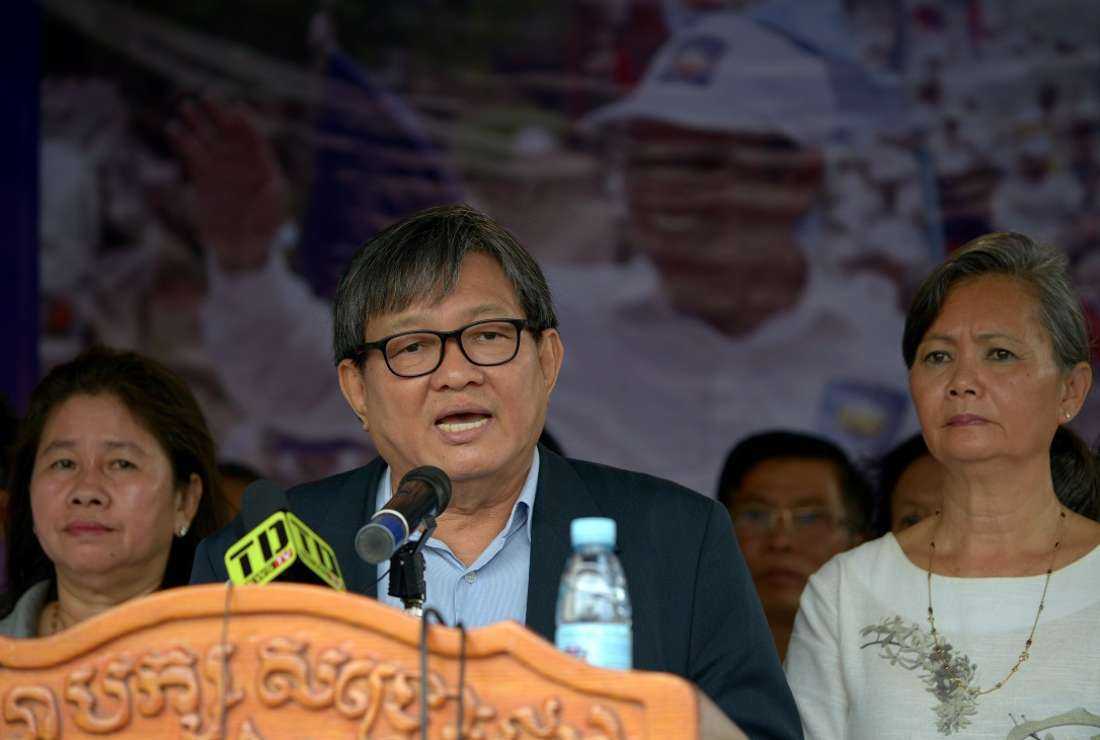 Son Chhay, vice-president of the Candlelight Party, has been charged with defamation after criticizing the Cambodian People’s Party and the National Election Committee over the June commune polls. (Photo: AFP)

The vice-president of the Candlelight Party has been charged with defamation by the Phnom Penh Municipal Court after criticizing the long-ruling Cambodian People’s Party (CPP) and the National Election Committee (NEC) over the June commune elections.

Both the CPP and the NEC, charged with overseeing the elections, filed defamation suits against Son Chhay following the poll which human rights groups say were marred by the disqualification of candidates and the jailing of opposition activists.

“[He] excessively exaggerated and accused the CPP and NEC of controlling the election process, intimidating people before and during the election, stealing ballots, and election rigging,” a warrant obtained by Cambodian media and issued late last week, read.

“He did not provide any evidence that these statements were true,” it also said.

The CPP, led by Prime Minister Hun Sen, is seeking US$1 million in compensation over claims that the NEC was biased in favor of the ruling party. The NEC alleged Son Chhay’s claims had defamed the committee with allegations of vote-rigging.

“These election results do not reflect the will of the people who were intimidated. Their votes were bought and stolen,” the NEC quoted Son Chhay as saying, on June 7 during an interview with the Cambodia daily IDEA TALK.

"More than a hundred activists are facing charges or been jailed"

The NEC also said these “baseless accusations” had misled the public and brought a loss of trust in the kingdom’s elections.

The Candlelight Party emerged as the leading opposition party in Cambodia at the June 5 commune ballot, to elect local district officials and governors. It is made up largely up of politicians and supporters of the outlawed Cambodian National Rescue Party (CNRP), which was dissolved by the courts in late 2017.

Its president Kem Sokha is currently before the courts in a long-running treason trial that is expected to resume this week. More than a hundred activists are facing charges or been jailed, another seven last week, while other senior figures have fled the country and live in exile.

Son Chhay was not available for comment. His lawyer Chuong Choungy told CamboJANews his client had not done anything wrong.

“He just raised concerns about the irregularities related to the election process and we are ready for the hearing,” Chuong Choungy said.

In a statement released ahead of the poll, Liz Throssell, spokesperson for the United Nations Human Rights Office, noted the latest bout of political obstruction followed on from the systematic shrinking of democratic space which undermines fundamental freedoms.

Among the 17 political parties registered for the commune elections, she said, the Candlelight Party, in particular, faced a paralyzing political environment.

“Its candidates say they are reluctant to register complaints for fear of facing retaliatory legal proceedings or being struck from the ballot,” she said.

The World Justice Project ranked Cambodia second from the bottom in its Rule of Law Index 2021 at 127 out of 128 countries. Cambodia rejected the ranking.