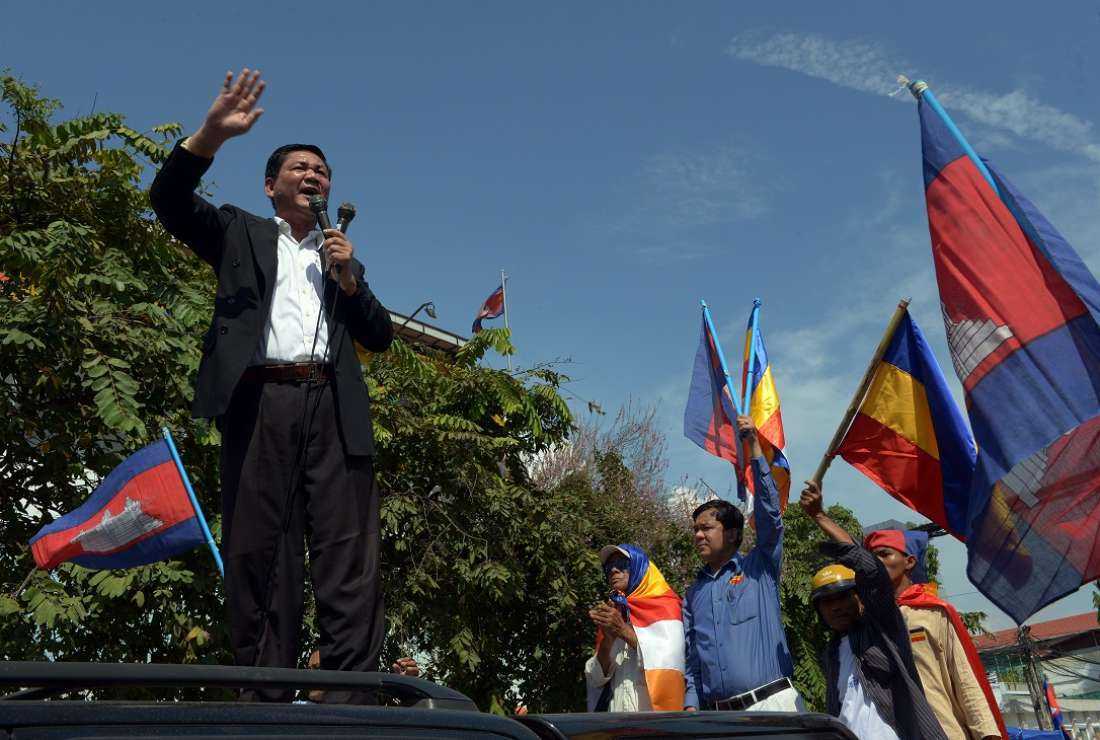 Thach Setha, then president of the Khmer Kampuchea Krom Community, addresses protesters in front of the Vietnamese embassy in Phnom Penh on Oct. 4, 2014. (Photo: AFP)

An opposition Candlelight Party candidate who was elected as a commune chief at recent elections has been charged with robbery over an incident that allegedly took place, and was resolved, more than 20 years ago.

Thach Setha, the Candlelight Party’s vice-president, told Radio Free Asia (RFA) that the arrest and charges were politically motivated and related to the seizure of property for debt repayment.

“Nhim Sarom took a motorbike from a man who owed him money. He took the bike to the police station to try to find a solution,” Thach Setha said. “The two men later reconciled and the problem was resolved. This is political intimidation.”

An arrest warrant obtained by RFA stated that the incident happened in 2002 but the warrant was dated June 21, 2012, and enforced on June 21, 2022, after it was signed by Kampong Thom provincial police commissioner Vorn Sophorn.

It accused Nhim Sarom of robbery and was issued by provincial court judge Sik Vanna.

“Why did they arrest him only after he was elected commune chief?” Thach Setha asked.

Nhim Sarom won a seat on the council of Chamna Lue commune in the central province of Kampong Thom during local elections held on June 5. RFA said police took him into custody on June 21 while he was working in the commune hall.

He was one of three Candlelight Party candidates elected to commune councils in Kampong Thom and the second elected party official to be arrested since the election.

Ley Sokkon, who won a seat in Battambang province, was arrested on June 8 for allegedly violating housing rights when he filmed local authorities of the ruling Cambodian People’s Party, which won about 73 percent of the overall vote, registering people to cast their ballots on election day.

Nhim Sarom’s wife, Khat Kheang, told RFA’s Khmer service that her husband was innocent and that his arrest was a violation of political rights and the will of the people.

RFA was unable to reach Vorn Sophorn for comment on Nhim Sarom’s arrest but added that Soeung Senkaruna, from the Cambodian Human Rights and Development Association, had described the arrest, 20 years after the incident, as “strange.”

“As far as this case is concerned, it looks like a political issue. It is something that we think will have a significant impact on political competition,” he said, adding that such arrests could undermine public confidence in Cambodia’s political and legal systems.