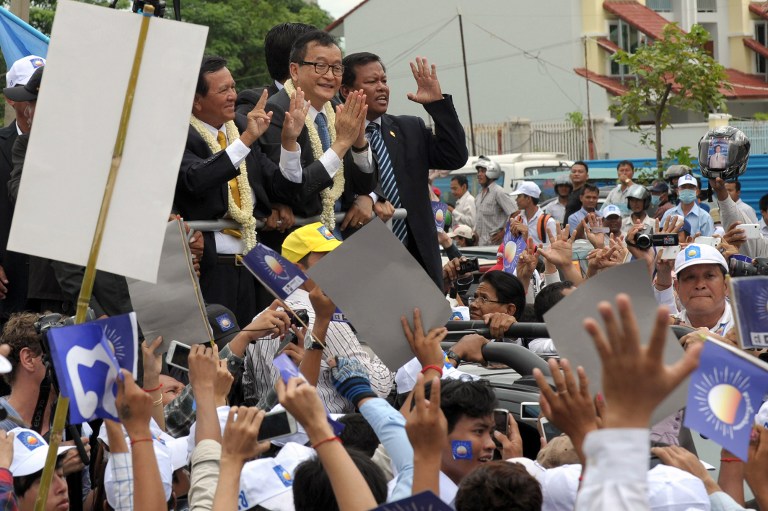 "I'm very happy and excited to see the leader of democracy returning to the country," said Sok Kan, 64, who was among those waiting to greet him.

The French-educated former banker fled in 2009 to avoid charges he contends were politically motivated.

Rainsy kissed the ground at the airport upon returning from France shortly after 9am (2am GMT) on a flight via Bangkok, and was due to later speak at Democracy Park.

"We expect some 40,000 people to greet him," said Yim Sovann, a spokesman for the opposition Cambodia National Rescue Party (CNRP).

"His presence will galvanise activists and voters."

The 64-year-old had faced 11 years in jail but was pardoned by King Sihamoni last week at Hun Sen's request, clearing the way for his return ahead of elections on July 28.

US lawmakers have called for the United States to cut off aid to Cambodia unless the polls are free and fair.

Rainsy said last Friday that he was "very happy" to be able to return to Cambodia, adding that the pardon was "a small victory for democracy" but also warning that "much more remains to be done."

The opposition leader, who is seen as the main challenger to strongman Hun Sen, has been removed from the electoral register and as a result is unable to run as a candidate this month unless parliament amends the law.

But he will hit the campaign trail soon after his return to try to boost support for his party.

Sovann said the CNRP would discuss possible ways to register Rainsy as a candidate after his return.

Rainsy left his homeland and moved to Paris aged 16 after the disappearance of his father, which historians blame on agents contracted to then-dictator Lon Nol.

After earning an MBA from France's INSEAD Business School, he worked for various banks in Paris before setting up his own accountancy firm.

He returned to Cambodia in 1992 and briefly held the post of finance minister.

He fled in 2005 after Hun Sen pressed defamation charges against him but received a royal pardon the following year and returned to the kingdom.

He left Cambodia once again in 2009 and was convicted in his absence for charges including inciting racial discrimination and disinformation.

One of Southeast Asia's longest-serving leaders, his Cambodian People's Party won the last two polls by a landslide amid allegations of fraud and election irregularities.

In May Hun Sen said he would try to stay in power for another decade, until he is 74. He had previously vowed to hold office until he reached 90.

While voters -- especially those from poor, rural areas -- may admire Rainsy they find it hard to identify with him given his background, said independent political analyst Chea Vannath.

Unlike Hun Sen, Rainsy neither experienced the Khmer Rouge's reign nor helped to liberate the country from the brutal regime, she said.

"Rainsy had better opportunities to pursue his education while Hun Sen stopped studying to join the liberation movement in the 1970s," she added. AFP