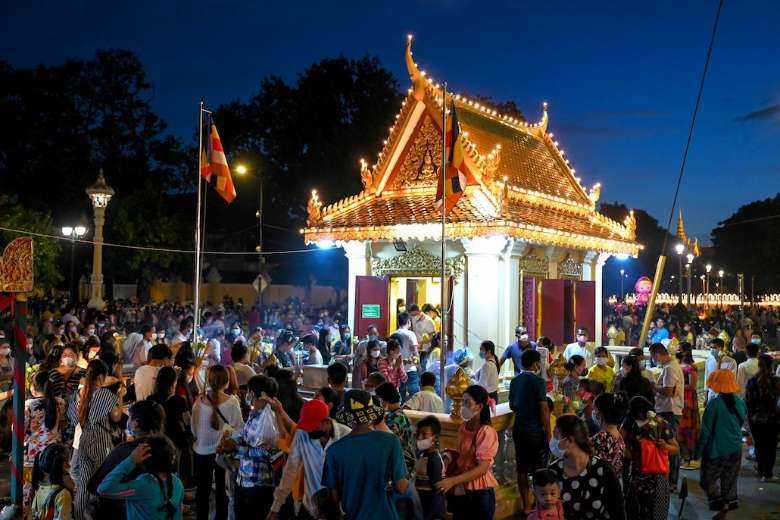 People pray at a shrine in front of the Royal Palace in Phnom Penh during the Water Festival on Nov. 19. (Photo: Tang Chhin Sothy/AFP)

An activist with the outlawed Cambodian National Rescue Party (CNRP) was hacked to death in Phnom Penh as the capital was winding down after celebrating the annual Water Festival.

Sin Khon, 30, was killed by a group of men armed with knives and swords in Chroy Changva district, the peninsula opposite the Royal Palace dividing the TonIe Sap and Mekong River, the government-friendly Khmer Times reported.

It quoted police as saying the attack occurred at 1.30am on Nov. 21 near Chas pagoda while the victim was eating a snack. He died on the way to hospital due to critical injuries.

Voice of Democracy (VOD) quoted a monk who declined to be named as saying the incident was political and that Sin Khon had lived at the pagoda for around 10 years.

“Sin Khon was my assistant, my disciple. He was a CNRP youth activist as well,” he said.

Srey Nuth, a 31-year-old food vendor working outside Wat Chas, told VOD she was cleaning up her stall when she saw the attack.

I feel terribly sorry he was killed. I feel bad and pity for him. I wish I had CCTV to help with the investigation

“He was running from there,” she said, pointing toward Wat Chas. “He fell over there,” Srey Nuth said, moving her finger toward the front step of her shop. “And then they slashed him over here.”

“The dish washer saw it happen and called out for help, but there was no one to help. I grabbed my son and ran inside. I panicked,” Srey Nuth said.

“There was blood everywhere and it was flowing into the sewage drain. He was kind and soft spoken. I feel terribly sorry he was killed. I feel bad and pity for him. I wish I had CCTV to help with the investigation.”

VOD added that Sin Khon was also attacked in May when struck on the back of the head, similar to some assaults on other opposition activists since the CNRP’s dissolution in 2017.

The CNRP was dissolved by the courts after party leaders refused to accept the results of elections in 2013 and widespread protests erupted. Its dissolution enabled the Cambodian People’s Party to win every seat contested at the ballot in 2018.

Since then hundreds of opposition supporters, bloggers, journalists and dissidents have been detained on charges ranging from incitement and treason to insulting Cambodia and the monarch.

The killing of Sin Khon was also widely reported on social media.

“… activists and members of dissolved opposition CNRP live in fear and insecurity. It's observed that threats, attacks and murders of those dissidents go unpunished,” political blogger Ou Ritthy said on his Twitter account.

Police said they were investigating the killing.