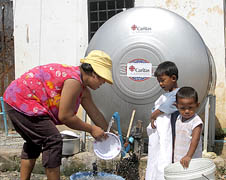 A service provided by a Catholic NGO in Cambodia
Share this article :

Aid workers fear that a draft law to “regulate” NGOs in Cambodia is an attempt to control community organizations but Catholic groups will not be affected, says a local Church worker. The law may affect NGOs working on sensitive issues such as human rights and may inconvenience some small village-based NGOs, according to Rene Ayala Moreira, assistant director of New Humanity, a Catholic-based NGO. “But I think Catholic Church activities will not be affected,” Moreira told ucanews.com following a Jan. 10 consultation hosted by the interior ministry with representatives of around 400 local and international NGOs. The meeting was to seek the views of NGOs on the draft law made public in December. The proposed law purports to increase transparency among the country’s vast network of NGOs and to fight terrorism and crime. Moreira said that the draft law, which includes 11 chapters and 58 articles, requires NGOs to renew their registration every year. “If an organization does anything sensitive, it may have problems renewing its registration. Our Church NGOs mostly work with poor and vulnerable communities and on development projects. We are not working on sensitive issues,” Moreira said. Besides New Humanity, two other Catholic NGOs -- Caritas Cambodia and the Don Bosco Foundation of Cambodia -- participated in the consultation. The Catholic directory lists 12 Catholic NGOs in the country. Interior minister and deputy prime minister Sar Kheng told consultation participants that the draft law is not aimed at threatening NGOs or violating their rights but is a step to prevent terrorists from misusing NGOs. Civil society organizations last week released a statement saying the draft law confirms long-standing fears that the government desires to control rather than strengthen civil society. Related reports Phnom Penh bishop seeks ‘localized’ Church Cambodia Catholics visit water festival victims CA12798.1636