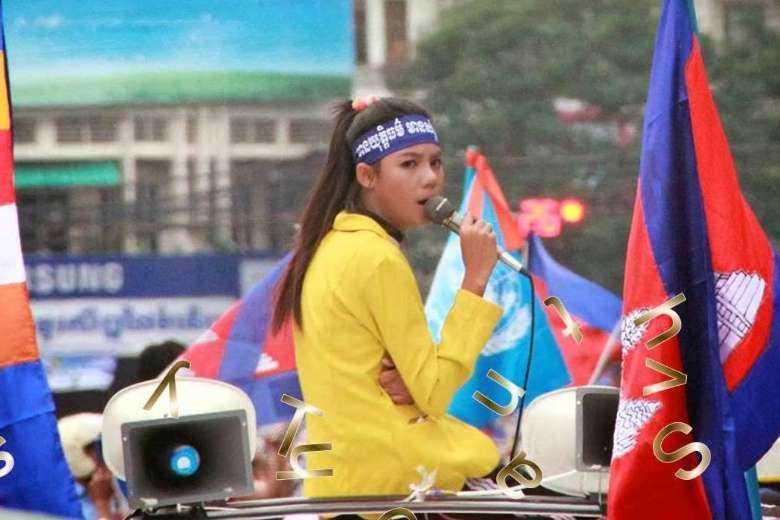 A prominent social media influencer has denied receiving a million-dollar bribe from Cambodian Prime Minister Hun Sen after opposition leader-in-exile Sam Rainsy claimed 400 leaked messages that proved his claims had been ignored by the Supreme Court.

“I would like to once again deny the accusation of the 400-page conversation and I have filed a complaint since 2016 on this case,” celebrity Thy Sovantha said, according to a dispatch from the government-friendly Fresh News service.

Her comments followed a statement issued by Sam Rainsy claiming 400 leaked secret messages that backed his claim had been obtained from the LINE messaging app and were available on Google Drive.

The messages, he said, were between Thy Sovantha and Hun Sen, who sued Sam Rainsy for US$1 million in a defamation suit in early 2017 after he claimed the celebrity was paid to abandon the opposition in favor of the ruling Cambodian People’s Party (CPP) ahead of elections in 2018.

“I said and maintain that he paid a bribe of $1 million to Thy Sovantha, then an attractive 21-year-old female supporter of the opposition Cambodia National Rescue Party (CNRP) and social media celebrity, to switch sides and attack the opposition,” Sam Rainsy said.

Hun Sen is claiming damages and interest of $1 million, which is astronomical in Cambodia. This is just a cynical attempt to match the sum he really did pay to Thy Sovantha

The CNRP was dissolved by the courts in late 2017 and the CPP won every seat contested at elections held in mid-2018. Hundreds of CNRP supporters have since been arrested and many jailed, upsetting human rights and free speech advocates.

In November, Phnom Penh Municipal Court ordered the forced sale of the CNRP’s headquarters and Sam Rainsy’s home, both in the Cambodian capital, to cover the legal costs stemming from the defamation suit, estimated at about $2 million.

“Hun Sen is claiming damages and interest of $1 million, which is astronomical in Cambodia,” Sam Rainsy said. “This is just a cynical attempt to match the sum he really did pay to Thy Sovantha.”

He added the court’s ruling on the sale was confirmed in December and his premises had since been seized by force to be auctioned off.

Sam Rainsy has also been sentenced in absentia to 25 years in prison and deprived of the right to vote or stand as a candidate in elections scheduled for mid-2023 for plotting to overthrow Hun Sen and his government.

Other prominent CNRP figures were handed jail terms of 22 years. The treason trial of former CNRP president Kem Sokha is expected to resume next week following delays caused by the Covid-19 pandemic.