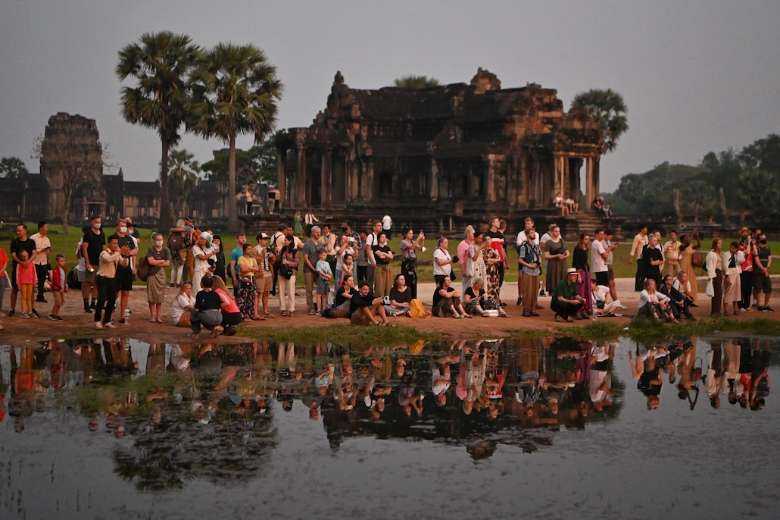 Tourists gather to watch the sun rise over the Angkor Wat temple complex in Siem Reap on April 8. Cambodia has emerged as a popular trafficking destination. (Photo: AFP)

The number of human trafficking cases in Cambodia almost doubled to 359 in 2021 and included surrogate mothers, babies, organ transplants, laborers and sex workers, the National Committee for Counter Trafficking said in its annual report.

“Criminals are choosing human trafficking as a career. They won’t let it go. They are taking advantage of us when we are facing a crisis,” he said.

The report was released one month after a group of 35 civil society groups told the Cambodian government to address the crisis of “forced labor, slavery and torture” after at least five Asian embassies warned its citizens against “such situations” in the country.

Their findings indicated that thousands of people, mostly foreign nationals, had been kidnapped, sold, trafficked or tricked into accepting jobs in Cambodia only to find themselves detained in large compounds and forced to work, often in online scams.

Committee vice-chairperson Chou Bun Eng told local media that traffickers had once used Cambodia for transiting but the country had emerged as a popular trafficking destination.

“The trafficking suspects brought in victims to Cambodia. The suspects lured the victims to work in Cambodia due to the country’s development and political stability,” she said.

Am Sam Ath, head of the Cambodian League for the Promotion and Defense of Human Rights, told Radio Free Asia’s Khmer Service that local authorities had not paid enough attention to the problem before the pandemic erupted more than two years ago.

“Violence, sexual assault and human trafficking against minors continue to occur. We urge the government to increase measures to prevent human trafficking, especially of minors,” he said, adding that many Cambodians trafficked into the sex industry were underage.

Last year the US Department put Cambodia on its Tier Two Watchlist for a third year, which essentially means the country does not fully meet the minimum standards for the elimination of trafficking but is making significant efforts to do so.

“They don’t make any money. What are the benefits of the risk after spending years working and finally ending up receiving social welfare back home?”

Chou Bun Eng added that since 2020 about 200,000 Cambodians had illegally crossed the border to work overseas but were not paid what they were promised.

“They don’t make any money. What are the benefits of the risk after spending years working and finally ending up receiving social welfare back home?” she said.

Chou Bun Eng said that in 2021 there were 235 human trafficking crime arrests and 400 people were sent to court. At least 1,390 victims were rescued and of them about 600 were women.