The dangers for South East Asian women who seek domestic work overseas have once again been highlighted by a group of Cambodian women returning from Malaysia. 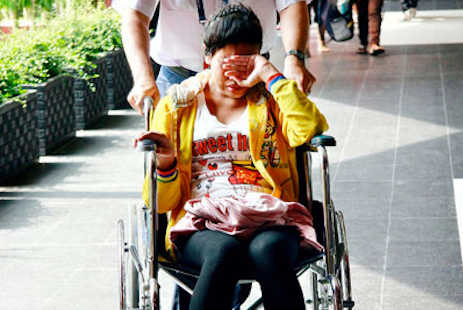 By Sen David and David Boyle

A Cambodian maid who reportedly gave birth in prison to a child conceived after she was kidnapped and raped in Malaysia, returned with her baby and 11 other alleged victims of vicious abuse yesterday. The sobbing, visibly traumatised women arrived at Phnom Penh International Airport yesterday, one in a wheelchair because she was too weak to walk. At least two had escaped attempted rapes while others were beaten and worked almost non-stop before they were thrown in prison as illegal immigrants, rights groups Licadho and the Cambodian Legal Education Centre said yesterday. An 18-year-old victim recounted how she was repeatedly raped over a two-month period by a man after escaping from an abusive employer about 10 months ago, and then arrested when police raided the perpetrator’s house because her passport had been confiscated. “She stayed in prison for seven months…the police kept her in prison until she delivered the baby,” he said, adding she was allowed to give birth in a medical facility before being taken back to prison. When another of the women, who escaped an attempted rape, took the matter to a Malaysian court, she was promised legal support by the Cambodian embassy which never materialised and was thrown in prison for immigration violations, he said. Full Story:Returning maids have horrific taleSource: Phnom Penh Post