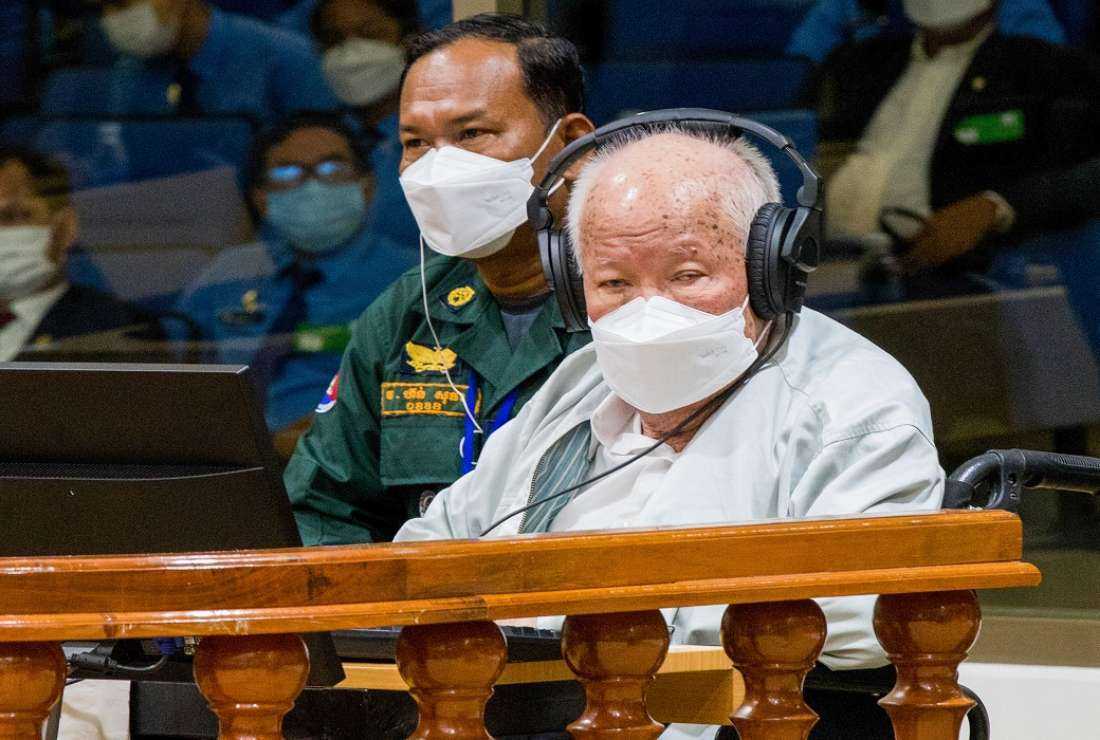 The United Nations-backed war crimes tribunal has upheld a genocide conviction against the last surviving Khmer Rouge leader, Khieu Samphan, for his role in the slaughter of Muslim Chams and ethnic Vietnamese more than 40 years ago.

In supporting the lower court’s finding, the Supreme Court Chamber of the Extraordinary Chambers in the Courts of Cambodia (ECCC) affirmed that the crime of genocide and crimes against humanity did occur under Pol Pot’s bloody 1975-79 rule, when two million people perished.

“Samphan’s conviction for the crime of genocide is affirmed,” Judge Kong Srim said after reading a detailed summary, for more than two hours, on genocide and a raft of other convictions which were covered under an additional charge of crimes against humanity.

He said defense lawyers had lodged what they said were 1,824 legal errors challenging the convictions, including the charge of crimes against humanity, made by the Trial Chamber.

These ranged from the ECCC’s jurisdiction within international law, to a flawed prosecution marred by a historical approach and insufficient evidence which defense lawyers said had backed their contention that Khieu Samphan did not receive a fair trial.

Throughout the hearing Kong Srim itemized each challenge and stated that Khieu Samphan had failed to support his claim, or ruled that the lower Trial Chamber had not erred in reaching its initial guilty verdict.

“This a historical day for the ECCC, for the Cambodian people"

Khieu Samphan, the 91-year-old former head of state, was convicted of genocide in 2018 alongside Nuon Chea, also known as “Brother Number 2,” who died before his appeal could be heard.

“I cannot accept the accusation that I was involved in a plot to commit crimes against my compatriots, including the Cham or the Vietnamese,” Khieu Samphan told the ECCC when launching his appeal in August last year.

Both men had already exhausted the appeals process for their previous 2014 convictions of crimes against humanity as had Kaing Guek Eav, known as Duch, who ran the S21 prison where about 24,000 people were processed for extermination in the Killing Fields.

Today's ruling was the last to be made by the ECCC which is expected to wind down its operations and end its mission by December 2024.

“This a historical day for the ECCC, for the Cambodian people, especially for the victims of the Khmer Rouge and for humanity,” said the war crimes tribunal spokesman Neth Pheaktra. “This is the beginning of the end for the ECCC too.”

Hundreds of Khmer Rouge victims, including ethnic Vietnamese, Chams, Buddhist clergy and their relatives had gathered inside and outside the courtroom where children played on the lawns.

“Yes, I am happy with the result. Khieu Samphan did this. The Khmer Rouge was horrible and killed millions of people. I’m also happy it’s over,” said a Muslin Cham, who declined to give his name.