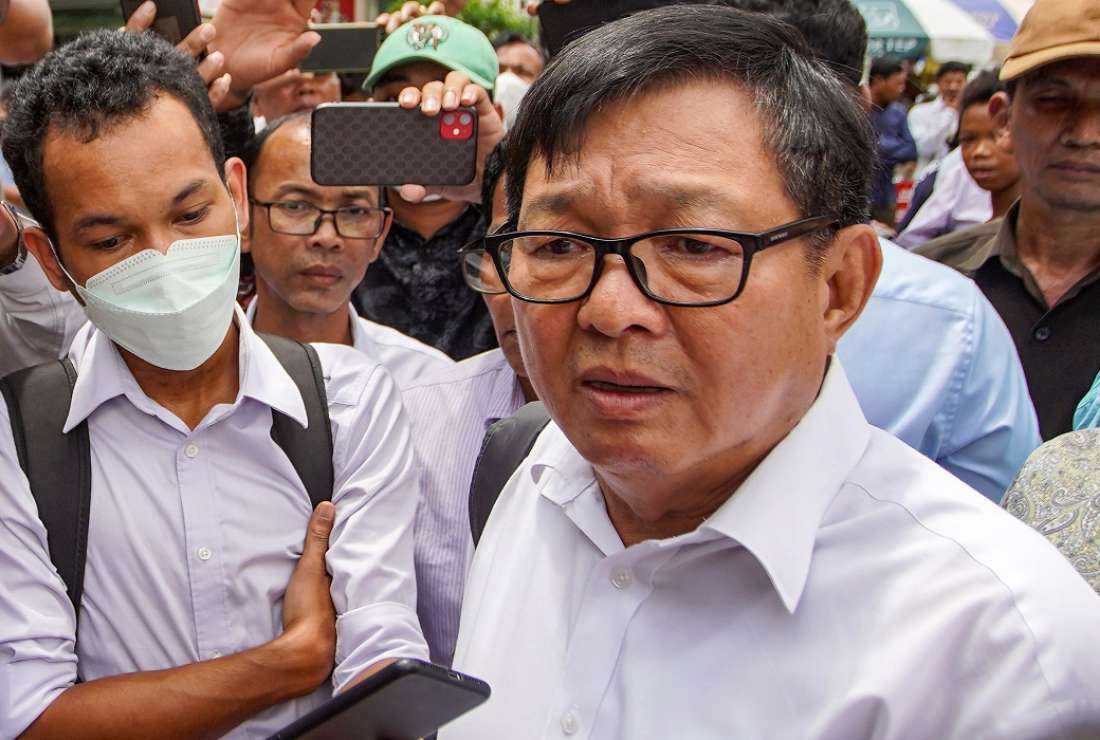 Two homes belonging to prominent Cambodian opposition politician Son Chhay have been seized by a court order to cover US$750,000 in fines incurred after he was convicted of defaming the ruling party and the National Election Committee (NEC).

Son Chhay told UCA News that one property was in the northwest provincial city of Siem Reap while the other was in Phnom Penh. He said he did not know how much the properties were worth and that he first heard about the court seizure through a Facebook post.

“They could at least wait. The defamation verdict has not been finalized yet because I have appealed this case to the Appeals Court and I can still go to the Supreme Court,” he said, adding his next court hearing has been set for Dec. 14.

“There’s still a few steps to go and I wonder why they are in such a hurry to do this to me.”

Son Chhay, vice-president of the Candlelight Party, was convicted of defamation by Phnom Penh Municipal Court after he criticized the ruling Cambodian People’s Party (CPP) and the NEC over the handling of the June commune elections.

The court found he had “excessively exaggerated and accused the CPP and NEC of controlling the election process” but “did not provide any evidence that these statements were true.”

Son Chhay said Phnom Penh Municipal Court ordered his homes to be “temporarily” seized to ensure the fines were paid and that the confiscation would be canceled once his fines were paid.

The pro-government Khmer Times reported that Judge Uong Vuthea had ordered the homes confiscated after Son Chhay made further public comments, saying that he had nothing to pay anyone and “they can do what they like with me, it’s up to them.”

His Candlelight Party emerged out of the ashes of the Cambodian National Rescue Party (CNRP) which was outlawed in late 2017. That enabled the long-ruling CPP to win every seat contested in the National Assembly at elections the following year.

Hundreds of CNRP supporters have since been convicted and jailed, some in absentia, for incitement and for attempting to overthrow the government.

At the June commune elections, according to the NEC, the CPP won about 5.3 million popular votes and 9,338 council seats out of the 11,622 seats while the Candlelight Party cemented itself as Cambodia’s main opposition party winning 1.6 million votes, taking 2,180 seats.

Son Chhay, a dual Australian-Cambodian citizen, also said he did not understand why he was fined such a large amount because the government had sued CNRP leader in exile, Sam Rainsy, in Paris for defamation but had only demanded an apology and just one euro in compensation.

“With Sam Rainsy, they wanted just one euro in compensation, so why do I have to suffer for US$750,000. The big question is what do they want from me,” he said.

Sam Rainsy was cleared of the defamation charge last month.

The World Justice Project ranked Cambodia second from the bottom in its Rule of Law Index 2022, at 139 out of 140 countries. Cambodia has rejected the ranking.