Phnom Penh Municipal Court has ordered the forced sale of the headquarters of the court-dissolved Cambodia National Rescue Party (CNRP) and the house of its former leader to cover legal compensation worth about US$2 million.

The order followed a request from four civil parties involved in four cases after CNRP leader Sam Rainsy failed to meet his legal obligations stemming from a verdict issued three years ago and other subsequent verdicts, reported the government-friendly Fresh News.

It was noted that Sam Rainsy was sued by Hun Sen in 2017 for defamation under article 305 of the penal code after the CNRP leader in exile alleged the prime minister had bribed former CNRP activist Thy Sovantha with $1 million to attack the opposition party.

Voice of Democracy reported that four pages of court documents were pasted to the wall of the home in the Meanchey district of Phnom Penh, with a nearby resident saying officials had come by just this morning.

The former party headquarters is owned by Sam Rainsy, which sits alongside his house on the same plot.

Political, judicial and now financial persecution. They want to reach me by all means. But they cannot break my will because I am far above their petty considerations

The court said the “sale by force” was in compliance with article 350 of the civil code.

“Political, judicial and now financial persecution. They want to reach me by all means. But they cannot break my will because I am far above their petty considerations,” he said. 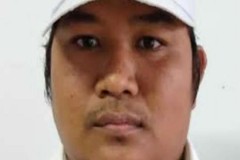 CNRP vice president Mu Sochua said questions about whether Sam Rainsy had paid any of the fines or the party had plans to pay them were “irrelevant to democracy.”

“The CNRP HQ is the symbol of democracy for the majority of the people of Cambodia,” she said, adding the building was used for discussions and debates on freedoms and rights.

Sam Rainsy refused to accept the results of elections held in 2013 amid unsubstantiated allegations the ballot was rigged. Violent protests followed and the CNRP was dissolved by the courts in late 2017 after a strong showing at commune elections.

Civil and criminal proceedings have also been launched by senior leaders with hundreds of CNRP supporters rounded up and jailed on charges ranging from incitement to treason.