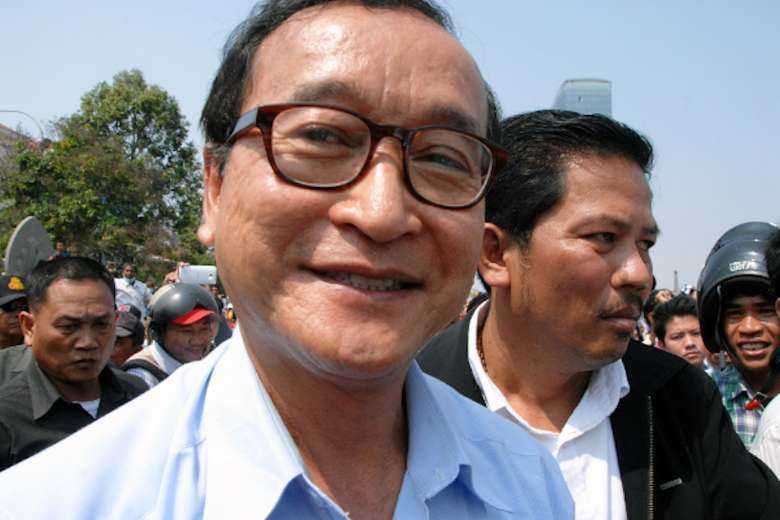 Sam Rainsy attempted to return to Cambodia from abroad in late 2019 and stage a popular uprising with the aim of ousting Hun Sen. (Photo: Luke Hunt)

A Cambodian court has dropped charges against 10 activists from the outlawed Cambodian National Rescue Party (CNRP) after they sent a letter to Prime Minister Hun Sen abandoning their former leader Sam Rainsy.

According to a dispatch from the government-friendly Fresh News service, charges of conspiracy and incitement to cause serious social unrest were dropped against former CNRP youth president Yim Sinorn, who currently resides in South Korea, and nine others.

The 10 were charged after Sam Rainsy attempted to return to Cambodia from abroad in late 2019 and stage a popular uprising with the aim of ousting Hun Sen. That was thwarted after airlines refused him access to flights into Cambodia.

“I have just received a message from my lawyer stating that the court had dropped charges against me and nine other members,” Yim Sinorn was quoted as saying.

“On behalf of my accomplices and myself, I would like to express my deep gratitude to premier Hun Sen for his intervention, requesting the court to review our cases.”

Hundreds of CNRP supporters have been rounded up and charged with incitement and treason in recent years. The CNRP was dissolved in late 2017 after violent street demonstrations and the refusal of CNRP leaders to accept the results of elections in 2013.

Hun Sen’s long-ruling Cambodian People’s Party (CPP) then won every seat contested at elections in 2018 and the crackdown intensified after Sam Rainsy threatened to return.

It said in the letter, dated Sept. 29, 2021, that Yim Sinorn and his former CNRP colleagues said they had led non-violent demonstrations but that they did not support the Nov. 9 “repatriation movement launched by Sam Rainsy.”

It also said the “repatriation movement” had “incited for hatred against the king and called on armed forces to launch coup against the legitimate government [sic]”.

The courts are currently resuming the mass trial of former CNRP members including its president Kem Sokha, slated for Jan. 19, following delays caused by the Covid-19 pandemic.

Kem Sokha has been accused of treason and conspiring with foreigners to topple the Cambodian government. If found guilty, he faces up to 30 years in jail.

Also before the courts is Theary Seng, a prominent Christian and pro-democracy activist who has been reprimanded by judges for her criticism of Cambodia’s judiciary.