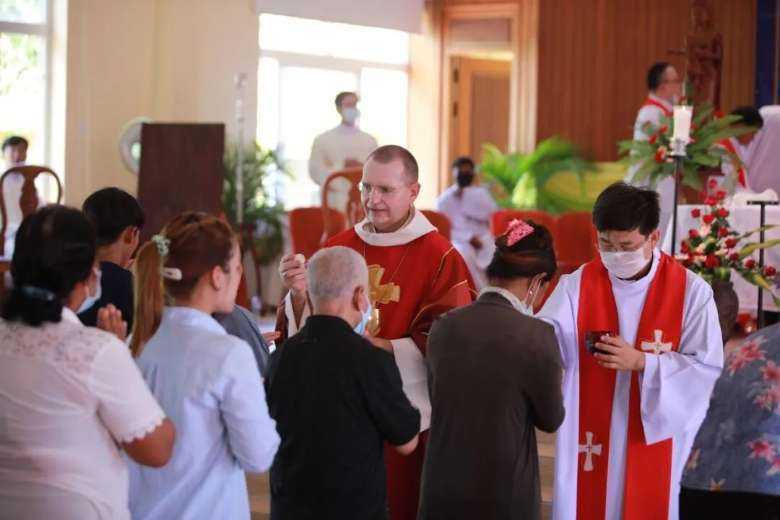 Bishop Olivier Schmidt with the delegates of the Phnom Penh diocesan synod during the Holy Mass. (Photo: catholiccambodia.org)

The first generation of Catholics in Cambodia, who emerged after the genocidal regime of Pol Pot, have suggested creating a Christian identity based on Cambodian culture in building up the local church.

The suggestion was part of a series of recommendations made during the Phnom Penh diocesan synod attended by 200 people including laity, clergy and religious.

The synod was part of an ongoing program that began in Catholic dioceses across the world in 2021 in preparation for the upcoming Synod of Bishops at the Vatican in October 2023.

The Phnom Penh synod that concluded on May 14 discussed the theme "Travel together as one, join in proclaiming the Gospel.” It made 12 recommendations for revitalizing evangelization in Cambodia, where Christianity was suppressed until some three decades ago.

Strengthening interfaith dialogue, involvement in environmental protection, creating a clear Christian identity based on Cambodian culture and developing communication were among the recommendations made for building the local church.

The synod dwelt on the history, persecution and emergence of the current church in Cambodia as members discussed ways to journey together as Catholics in local communities and the challenges individual Catholics face in their faith journey.

“As a challenge, almost all Cambodian Catholics today are the new shoots of the first generation's faith”

“All the hardships we have heard are part of our history because of the war and the genocidal regime of Pol Pot for more than 20 years. We have had no opportunity to be reunited with our pastors, our clergy, who died during the Pol Pot era,” said Bishop Olivier Michel Marie Schmitthaeusler of Phnom Penh.

The bishop, a member of the Paris Foreign Missions Society (MEP), said these tribulations led to the eradication of faith for the next generation. “As a challenge, almost all Cambodian Catholics today are the new shoots of the first generation's faith,” he added,

The French missionary, who came to Cambodia in 1998, told the gathering that although they cannot reunite with their loved ones lost during the genocide, they must draw strength from their sacrifices and pass on the faith to the next generation.

For many young Cambodian Catholics, the entire process was a new experience, he noted.

The synod representatives and the bishop emphasized the need to evangelize without leaving Khmer tradition and culture. The suggestions made during the synod will not only benefit the Cambodian church but will help the church all around the world, said Bishop Schmitthaeusler.

Religious practices were suspended under the repressive regime of Pol Pot (1925-98) that is blamed for murdering at least 1.7 million Cambodians from 1975 to 1979 as it wanted to annihilate all whom they considered traitors and counter-revolutionaries.

The current generation of Christians are considered the first Catholic community as most of their predecessors were killed by mass executions, forced labor, physical abuse, malnutrition and diseases at labor camps run by the Khmer Rouge.

The synod recommendations will be passed on to the regional bishops' council for further study and for sharing with the general secretariat of the Synod of Bishops in the Vatican.

Meak Sorn, a synod participant, said community means family to him. "We are all brothers and sisters working together to practice our faith and to evangelize."

Khun Kanha, a female representative from Boeung Tumpun community, said the synod had given her ideas to improve cooperation among individuals and their communities.