Cambodian land activist Tep Vanny is escorted by prison guards at the Appeal Court in Phnom Penh on Feb. 15. She was appealing a six-month sentence handed down in 2016 after being found guilty for cursing public officials during a protest in 2011. (Photo by Tang Chhin Sothy/AFP)

Cambodia's government is using its courts to silence human rights defenders and political activists, Amnesty International said in a new report released May 30.

Using its tight grip on the criminal justice system, the Cambodian government has brought a series of trumped-up charges against members of the political opposition, trade union activists, human rights activists, and political commentators, in an attempt to harass, intimidate and punish them, it said.

"In Cambodia, the courts are tools in the hands of the government. Much lip-service is paid to the judiciary's independence, but the evidence reveals a cynical manipulation of the criminal justice system to serve political goals and silence people whose views the government refuses to tolerate," said Champa Patel, Amnesty's Director for Southeast Asia and the Pacific.

There are currently 27 human rights defenders and political activists behind bars while hundreds of others are subject to criminal proceedings as part of a concerted attempt by the government to crush any public criticism in the country, according to Patel.

One of the most prominent cases in 2016 involved the detention of human rights defenders from Cambodian Human Rights and Development Association (ADHOC), the country's oldest human rights organization. Five current and former ADHOC members were charged with bribery over an alleged sex scandal. They have since spent over a year in pre-trial detention, Amnesty said.

Another case highlighted in the briefing is that of Tep Vanny, Cambodia's most high-profile activist who has been arrested at least five times since the last general election.

Tep Vanny is a housing rights activist who has spent a decade defending her community in central Phnom Penh, where thousands of families have been evicted from their homes. 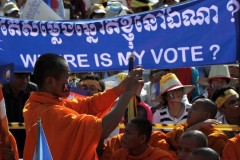