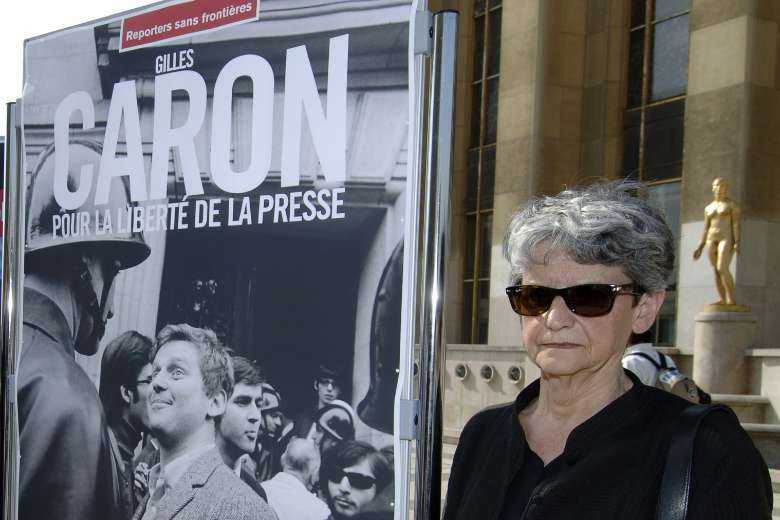 Marianne Caron, wife of French photographer Gilles Caron who disappeared in Cambodia in 1970, during an exhibition organized by Reporters Without Borders in Paris on May 3, 2006, to denounce predators of press freedom. (Photo: AFP)

The Cambodian Center for Human Rights (CCHR) has sharply rebuked Prime Minister Hun Sen’s regime, claiming repressive laws had been instituted and used in wielding a crackdown over recent years.

In its annual report on the State of Freedom of Expression, Press Freedom and Access to Information in Cambodia, CCHR said the government had revoked seven media licenses between Sept. 1, 2020, and Aug. 31, 2021.

“Numerous journalists and human rights defenders faced legal action and intimidation, journalists and citizens faced many obstacles when attempting to access information and self-censorship continued to rise,” it said, adding that female journalists were discriminated against.

“Intimidation, surveillance, threats or judicial harassment are also used on a regular basis to target those who dare to speak up, with journalists and human rights defenders being the primary targets of the Royal Government of Cambodia’s witch hunt against critical voices,” CCHR said.

Cambodia has often been sharply criticized for repressing press freedom ever since a 30-year civil war ended in 1998, but civil rights groups have stepped up their scrutiny since 2017 when the government initiated a crackdown amid widespread protests.

That resulted in the closure of the fiercely independent Cambodian Daily and the forced sale of the Phnom Penh Post after both were issued with exorbitant tax bills. Access to media outlets operating outside of Cambodia is also restricted.

“Cambodia is no stranger to the deterioration of freedom of expression. The country continues its worrying trend of overpolicing free speech and silencing critical voices, a repression that has been exacerbated by Covid-19"

“Cambodia is no stranger to the deterioration of freedom of expression. The country continues its worrying trend of overpolicing free speech and silencing critical voices, a repression that has been exacerbated by Covid-19,” CCHR said.

Other civil rights groups, including Human Rights Watch, have accused the government of using laws to curb the spread of the pandemic as an excuse to stymie freedom of expression, a charge the government rejects.

CCHR said its 47-page report demonstrated a lack of Cambodian compliance with its own laws and international law and standards, which enabled the government to “illegitimately restrict the exercise of the rights of freedom of expression.”

It urged the government to encourage media pluralism and scrap requirements mandated for independent media outlets to obtain licenses from the Information Ministry alongside sub-decrees that are not in line with Cambodia’s constitution that guaranteed press freedom.

CCHR also said lese majeste laws, potentially used against anyone thought to have defamed the monarch, had constituted “an impermissible restriction on press freedom” and should be removed from the criminal code and that judicial harassment of journalists should end.

That included the elimination of discriminatory attitudes towards women who work in journalism and as human rights defenders.