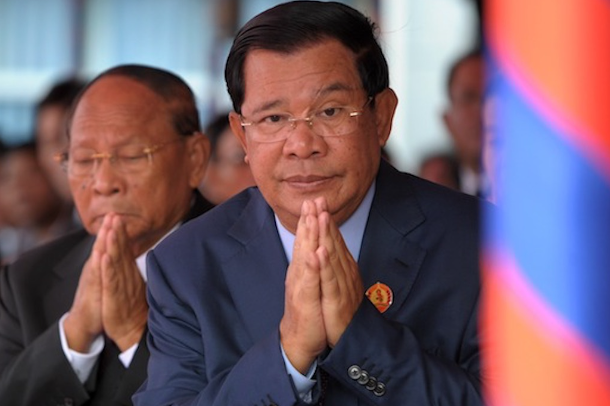 Cambodian Prime Minister Hun Sen has been accused of hiding behind the pandemic to commit rampant rights violations. (Photo: AFP)

The Cambodian government has been urged to end its repression of the political opposition carried out since the outbreak of the coronavirus pandemic.

Another 80 people released on bail face rearrest at any time, the group said, adding that authorities should immediately release 32 prisoners and pretrial detainees held on politically motivated charges, including 23 members of the banned Cambodia National Rescue Party (CNRP).

“The Cambodian government should stop using the world’s attention on the Covid-19 pandemic as cover to crack down on the opposition,” said Phil Robertson, deputy Asia director of HRW. “Concerned governments should make it clear that Prime Minister Hun Sen can’t hide behind a deadly virus to commit rampant rights violations.”

In the first weeks after Covid-19’s outbreak, authorities arrested more than 30 people based on allegations that they had spread “fake news” about the virus in Cambodia. Among those arrested were opposition activists, a child, ordinary citizens speaking out on Facebook, and journalists.

Prime Minister Hun Sen claimed on June 1 that the CNRP was trying to use the pandemic to “cause chaos.” He referred to a statement by exiled former opposition leader Sam Rainsy that borrowers unable to repay their debts should not have to sell their land or homes to pay back their debtors. Hun Sen threatened CRNP activists with arrest.

On May 31, police arrested Kak Komphear, the chief of the Phnom Penh executive committee of the CNRP, on politically motivated charges of conspiracy and incitement. This followed another case in 2019 in which he was sentenced to 20 months in absentia.

He was one of over 60 opposition members arrested in the three months prior to the announced return of the exiled CNRP leader Sam Rainsy and others in November last year.

On June 8, Phnom Penh’s Appeals Court rejected 10 applications for bail filed by detained opposition figures. The authorities have charged them with incitement and conspiracy to incite military personnel to disobedience based on acts allegedly committed during January and February 2018. Many opposition leadership figures remain in exile out of fear of arrest. In recent weeks, HRW has received credible reports that Cambodian officials and agents have carried out surveillance of opposition members living in neighboring countries.

Kem Sokha, the CNRP leader out on bail, faces a trial based on unsubstantiated treason charges but it has been delayed indefinitely due to the pandemic, HRW said.

The European Commission announced in February the partial suspension of Cambodia’s preferential trade preferences with the European Union after the government failed to address serious human rights concerns, including its crackdown on the political opposition.

“The European Union and its member states should factor in the Cambodian government’s renewed crackdown on opposition members when finalizing Cambodia’s partial suspension of trade preferences,” Robertson said.