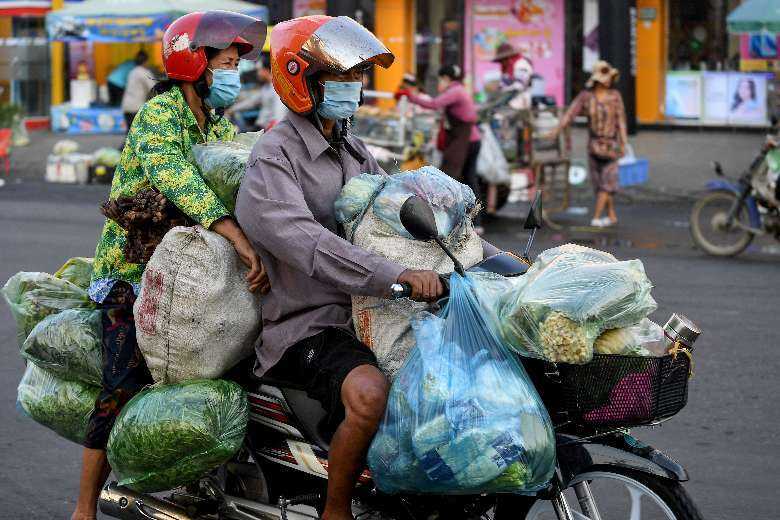 A couple transport vegetables on a motorcycle in Phnom Penh, Cambodia, on March 8. (Photo: AFP)

Civil society groups have told the Cambodian government to address the crisis of “forced labor, slavery and torture” after at least five Asian embassies warned its citizens against “such situations” in the country.

Reports indicated that thousands of people, mostly foreign nationals, had been kidnapped, sold, trafficked or tricked into accepting jobs in Cambodia only to find themselves detained in large compounds and forced to work, the groups said in a statement.

That work included online scam operations targeting foreign nationals outside the country, primarily based in the southern port town of Sihanoukville. Similar abuses had been reported in Phnom Penh, Pursat, Koh Kong and other provinces.

“Workers who escape report having faced physical and mental threats and violence at the hands of their captors,” the groups said, adding that the embassies of Indonesia, Vietnam, Thailand, Pakistan and China had issued warnings about the situation.

“The continued existence of these operations is a tragedy, and we are horrified that Cambodia is being used as a base for such inhumanity. All relevant actors must immediately guarantee that no one is subject to slavery or torture within Cambodia,” their statement said.

“When images of crimes happening in Cambodia are spread around the world, people would wonder why Cambodia is so bad. Therefore, the problem must be solved before the elections”

The statement was issued one day after Deputy Prime Minister and Minister of Interior Sar Kheng warned criminals he would put an end to crimes taking place in Sihanoukville before the mid-year commune elections.

“When images of crimes happening in Cambodia are spread around the world, people would wonder why Cambodia is so bad. Therefore, the problem must be solved before the elections,” he was quoted by the government-friendly Khmer Times as saying.

Sar Kheng has also rejected a Chinese request for extra powers in arresting its own nationals involved in criminal activity.

“The above proposal of the Chinese side is not acceptable. On the other hand, such a proposal is also related to the sovereignty of Cambodia,” he said. “If we give this sovereignty to China, it will also be given to other countries that have offices in Cambodia. There are quite a few countries.”

For decades Sihanoukville has held a notorious reputation as a haven for criminals who can operate with impunity. But the problems have escalated since the mid-2010s when Chinese investors began spending billions of dollars transforming the port city into a metropolis built on gambling.

The group of 35 said Cambodian authorities had responded to some individual complaints but added “this crisis cannot be resolved on a case-by-case basis.”

They called for a coordinated mass response between the Cambodian and foreign governments and international organizations including the United Nations.

“The government should fully investigate and abolish all compounds linked with illegal gambling and fraud operations and associated forced labor, slavery or torture,” they said. “The state should also investigate alleged complicity between some government authorities and the criminal enterprises."