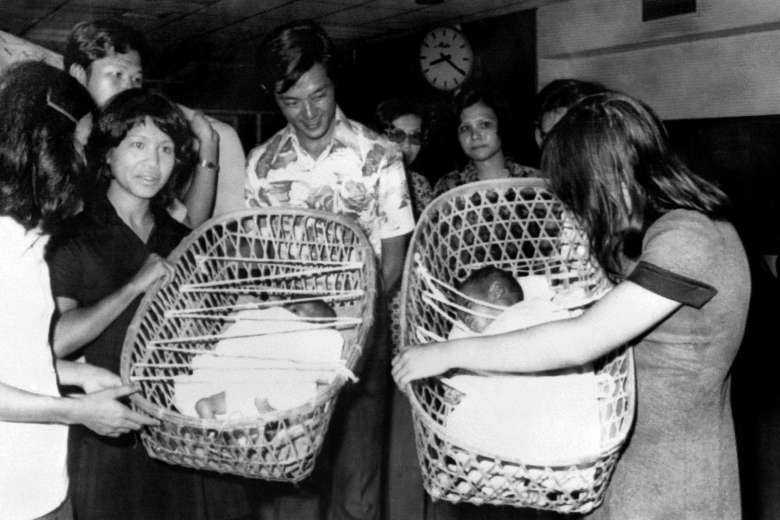 New adopted Cambodian orphan babies pass through Bangkok with their foreign families in this picture released on April 8, 1975. (Photo: AFP)

Cambodia will shortly resume child adoptions after a decade-long hiatus imposed amid controversy over allegations that not all infants were orphans and some were stolen.

The Social Affairs Ministry has confirmed adoptions are pending to the United States and Italy, raising the alarm among non-governmental organizations (NGOs) seeking child protection norms of international standards.

“We fear these decisions will lead to more families being irreparably torn apart by a poorly regulated system that has failed to protect children’s best interests in the past,” said rights group Licadho in a statement, adding it was “deeply alarmed.”

It said Cambodia sent 3,696 children abroad for adoption between 1998 and 2011 before suspending foreign adoptions following evidence of fraud and corruption.

This included forged documents that changed some children’s names or ages or claimed they were orphaned or abandoned before the children were adopted abroad without parental consent.

“We have had the laws on inter-country adoption since 2009, but back then we did not have adequate mechanism and capacity to enforce them. We have all of those now”

“Despite Cambodia acceding to the Hague Convention on Protection of Children and Cooperation in Respect of Inter-country Adoption in 2007 and enacting numerous laws and policies, there is no guarantee that inter-country adoptions would occur in children’s best interests.”

Social Affairs Ministry spokesman Touch Channy told the Khmer Times that the government was in the process of approving at least nine inter-country adoption applications submitted by international agencies. That included the US and Italy.

“We have had the laws on inter-country adoption since 2009, but back then we did not have adequate mechanism and capacity to enforce them. We have all of those now,” he added.

“Now we are working on strengthening some legal instruments under the laws. We work with agencies, not individuals, for the adoptions. The agencies have to inform the government of the number and type of children their clients are looking for. The Ministry of Social Affairs will grant them the license, and we ourselves will look for the children in orphanages.”

The US banned adoptions from Cambodia in 2001 after allegations that Cambodian mothers had given up their children to adoption agencies in exchange for payment.

Other countries, including the Netherlands and Britain, followed suit and banned adoptions from Cambodia. Demand dropped and Cambodia formally stopped all foreign adoptions in 2009.

According to a US government website, Washington welcomed all efforts by Cambodia to strengthen its child welfare system and to improve the integrity of its domestic and inter-country adoption processes.

“We look forward to receiving additional information from the Cambodian government on their internal inter-country adoption process in order to be able to determine whether Cambodia has a fully functional Hague Convention process in place that would allow the United States to process convention adoptions with Cambodia,” it said.