Cambodia tells US not to interfere over Thach Setha arrest

Phnom Penh irritated by calls for stronger democracy ahead of polls 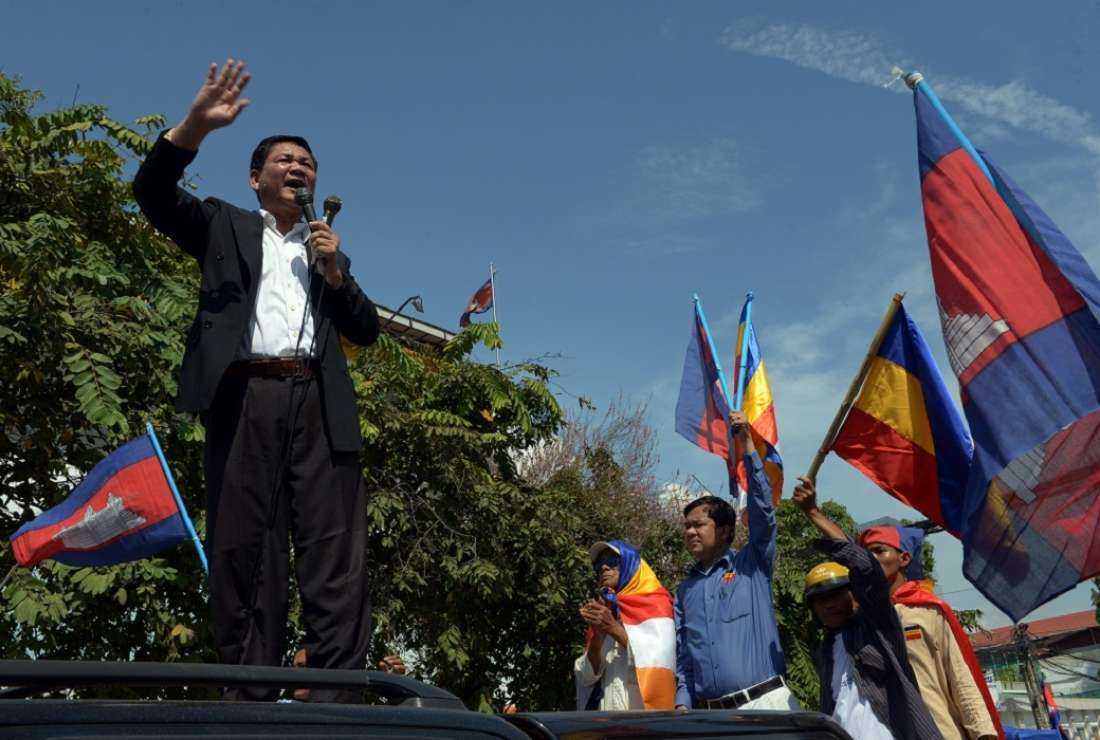 Thach Setha speaks to protesters during a protest in front of the Vietnamese embassy in Phnom Penh in this Oct. 4, 2014 photo. (Photo: AFP)

Cambodia’s foreign ministry has told the United States embassy in Phnom Penh not to interfere in its internal affairs following the arrest of opposition politician Thach Setha and the embassy's calls for a more open society ahead of national elections.

Thach Setha, vice president of the Candlelight Party, has been charged with embezzlement, passing a bad check and failing to appear in court. But he is also one of three senior party figures charged in recent weeks and one of the hundreds of dissidents to appear in courts in recent years.

“The best way to ensure independence for a small country like Cambodia is not to interfere in internal affairs or to support one side against the other,” the foreign ministry said in a statement, translated by local media.

It was the latest in a slew of statements and warnings from the long-ruling Cambodian People’s Party (CPP) as it gears up for national elections on July 23, which it is widely expected to win given a lack of political competition.

Prime Minister Hun Sen has insisted that Thach Setha’s arrest “was purely law enforcement and not politically motivated” and statements to the contrary by the Candlelight Party would result in legal action if an apology was not forthcoming.

Hun Sen “pledged zero tolerance for those who insult the CPP,” Fresh News reported on Jan 19. “From now on there will be no tolerance and no exceptions from the grassroots to the top level if there is an insult against the CPP.”

“Democracy and all rights come with obligations"

In another statement issued on Jan. 18, the CPP insisted it led “a liberal, multi-party democracy” and claimed the Candlelight Party's had “seriously violated the CPP's honor and dignity” and urged “relevant authorities to take immediate action against any individual who violates the law”.

Pro-government media here said the latest statement was issued in response to a story by broadcaster Radio France Internationale, headlined: “Arrest of Thach Setha: US Embassy urges authorities to strengthen democracy ahead of National Elections”.

“Democracy and all rights come with obligations as stated in national law. Non-compliance with those obligations will lead to legal consequences,” the foreign ministry said. “Cases of vandalism in Washington and riots that destroyed the presidential and parliament buildings in Brasilia, which led to legal action, are examples of these consequences.”

The CPP won every seat in the National Assembly at elections in 2018 after the Cambodian National Rescue Party (CNRP) was dissolved by the courts and a crackdown launched amid allegations of a plot to overthrow Hun Sen through a color revolution backed by foreign powers.

A 132-page government treatise, released in early 2018, painted ‘a picture of Cambodia on the brink of war due to the actions of the CNRP and civil society organizations, which are said to be funded by “superpowers”.’

It was a veiled reference to the US, however, analysts say prosecutors in five mass trials, alongside the many separate legal cases — ranging from defamation to incitement and plotting to overthrow the government — have not produced any evidence to support those claims.