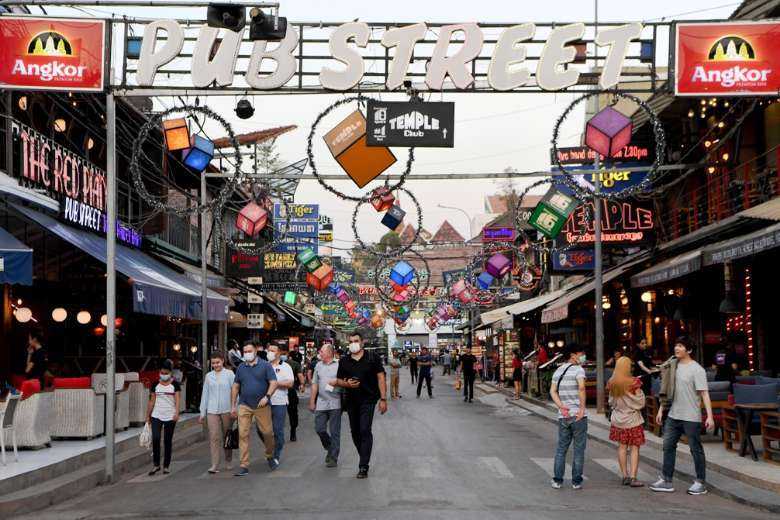 Tourists walk along Pub Street in Siem Reap last year. Cambodia is hoping to reopen pubs, karaokes and discotheques by the end of November. (Photo: AFP)

Cambodia’s plans to reboot the economy after fully vaccinating about 87 percent of its population against Covid-19 are moving slowly, with the government delaying the reopening of kindergartens and businesses deemed high risk.

The Ministry of Education, Youth and Sports had earlier announced it would be restarting public and private educational institutions nationwide from Nov. 1. So far, 2,641 schools have resumed classes.

Prime Minister Hun Sen said more vaccinations and further monitoring of Covid-19 infection rates were required despite the number of confirmed daily cases falling to less than 70 a day.

“Children in kindergarten are 3-4 years old and they are yet [to be] vaccinated. Therefore, we should hold on resuming the kindergarten program,” he said.

Hun Sen further said the reopening of high-risk businesses including karaoke, bars, discotheques and other nightclubs would not be considered until Nov. 30. “We first need to monitor the infection rate after schools reopen,” he said

The annual boat races on the Tonle Sap in Phnom Penh, the highlight of the November Water Festival, have also been canceled. However, wedding ceremonies of up to 200 guests, excluding service staff, will be allowed.

Cambodia has lifted a ban on direct flights from the Philippines, Indonesia and Malaysia in a bid to bolster the country’s once-thriving tourism industry, which, like most of the economy, has been crushed by the pandemic.

Domestic tourism has improved with 174,543 Cambodians holidaying at home last weekend, according to new figures from the Tourism Ministry.

“Tourism resorts and destinations across the country have reopened to travelers, while tourism businesses that had been suspended in the past are also preparing to receive sightseers as well as tourists during the upcoming Water Festival,” Tourism Minister Thong Khon said.

Meanwhile, Australian Foreign Minister Marise Payne — on a whistlestop tour of the region — has reaffirmed her country’s commitment to providing 3.25 million doses of Covid-19 vaccines, with one million to land in Cambodia before the end of the year.

Health Ministry spokeswoman Or Vandine said the decision to spend US$2.5 million on the US-made Covid-19 drug Molnupiravir for the treatment of 50,000 people would reduce the risk of hospitalization and the death rate among Covid-19 patients.

“We’ve permitted the use of this drug because we observed that the drug is safe and effective according to the research and the clinical trials in developed countries including the US itself,” she said.