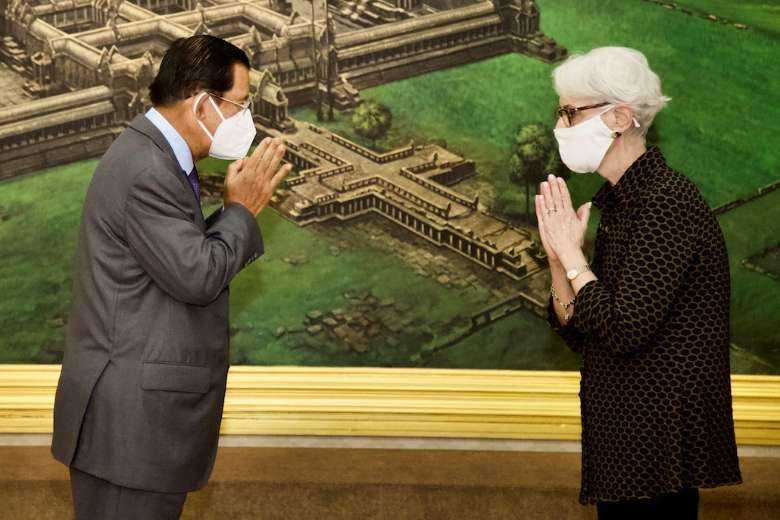 Cambodia's Prime Minister Hun Sen greets US Deputy Secretary of State Wendy Sherman during a meeting at the Peace Palace in Phnom Penh on June 1. (Photo: US embassy Phnom Penh/AFP)

The Cambodian government has asked the United States to consider three options in a bid to wipe out a 1970s war era debt that stands at more than US$700 million.

A request was made through US Deputy Secretary of State Wendy Sherman, who made a whistle-stop trip to Cambodia this week when she met with Prime Minister Hun Sen.

The premier’s personal secretary Eang Sophalleth said Hun Sen had proposed three mechanisms for resolving the debt: allowing Cambodia to repay gradually, repayment with an interest rate of 1 percent, or turning more than 70 percent of the debt into development aid for Cambodia covering education, culture and de-mining.

A dispatch from the government-friendly news portal Fresh News said Hun Sen considered the loan made to the Lon Nol government in the early 1970s “a dirty debt.”

It said Cambodia “was forced to buy US bombs to shower on her people, causing countless deaths and injuries to the Khmer people.”

During that time, the US military was targeting the Khmer Rouge, which eventually seized control of the country in 1975 and deployed a genocide that slaughtered a third of the population. Hun Sen defected from the Khmer Rouge in 1977.

Cambodia racked up $278 million in US loans under the Lon Nol government in the early 1970s, when the Khmer Rouge were gaining in strength. But his efforts to defeat the ultra-Maoists were undermined by gross corruption within his own administration.

US records show the loans were made for food and other agricultural goods needed in isolated areas of the Cambodian countryside which had been cut off by the Khmer Rouge.

But the debt has risen sharply over the years due to interest. A US embassy official noted in 2017 that the debt was worth about $505 million, all in arrears with a concessional 3 percent interest rate, which was below market rates. The Fresh News dispatch said the debt was now worth more than $700 million including interest payments.

The US had also encouraged Phnom Penh to work with Washington in finding a solution to the debt since shortly after the 1995 Paris Club negotiations.

Sources said there was a brief discussion of Cambodia’s official debt to the US during the November 2015 US-Cambodia Competitiveness and Growth Dialogue, while the last detailed discussion of the issue occurred in 2011, when a US delegation visited Phnom Penh.

In 2008 testimony before Congress on the debt, US officials said they had negotiated for several years with the Hun Sen government to work out a payment schedule but to no avail.

“Sherman expressed deep satisfaction on the Cambodia-US cooperation in areas such as the finding of US military remains in Cambodia, counter-terrorism and humanitarian activities,” Eang Sophalleth said.

“She also mentioned opportunities to expand cooperation in the oil and gas sector, investment in water, infrastructure, green energy and other issues.”