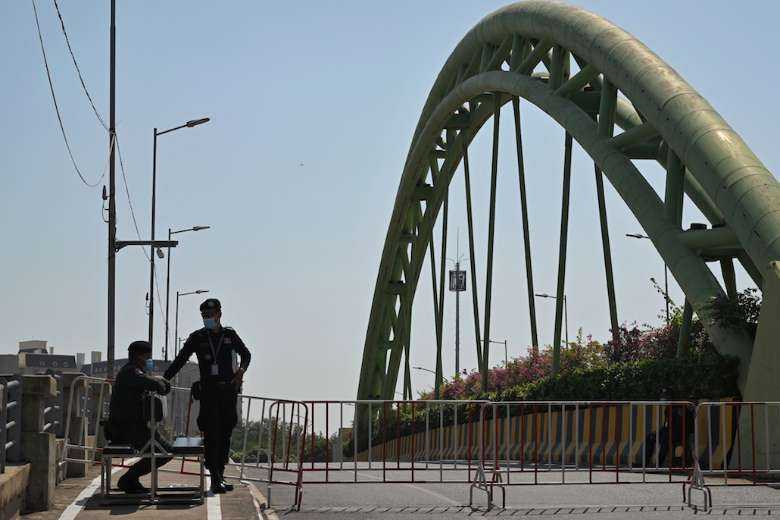 Police stand guard as they lock down a bridge to Diamond Island in Phnom Penh on Feb. 20 after authorities found 32 local cases of Covid-19. (Photo: Tang Chhin Sothy/AFP)

City blocks in Phnom Penh have been locked down after at least 32 people — nearly all Chinese — tested positive for Covid-19 within 10 hours of heavy partying in the Cambodian capital’s nightclubs.

Some of the patients and two security guards are also being investigated for breaching quarantine and taking bribes.

The third community transmission since the pandemic emerged about a year ago prompted Prime Minister Hun Sen to impose strict measures, locking down residential areas at Diamond Island in the center of the capital and other parts while initiating nationwide tracing.

“This is a new alarming point, which we have never seen before since the beginning of the outbreak in Cambodia,” Hun Sen said in a nationwide address.

He said the source of this outbreak was traced to four quarantined people from the Sokha Hotel who escaped by bribing two security guards and had spent time in several apartments in the capital.

Two tested positive for the virus while two security guards at the hotel were understood to be under investigation for taking bribes and allowing the four to leave the hotel.

“The bad news came in the midst of us showing good results in combating imported cases from Thailand and Vietnam,” Hun Sen said while calling on people to quarantine and isolate themselves as well as cooperate with authorities to locate people they came into contact with.

One Vietnamese and one Taiwanese were believed to be among the 32 who tested positive.

Cambodia had won widespread applause for containing the virus. Prior to the latest outbreak, it had just confirmed 484 cases of Covid-19 with 470 recoveries and no deaths.

It was not the first time that Chinese people, who have a heavy presence in Cambodia, have been accused of skipping quarantine.

In August last year, concerns were raised about six Chinese nationals who tested positive for the Covid-19 virus but went missing after their embassy in Phnom Penh questioned the results, medical sources said.

After the initial tests were conducted around July 25 following their arrival in Phnom Penh a Chinese embassy official urged the health ministry not to include the results in its daily reports, which are made public through government-backed news outlets.

Sources said the six were then retested and all the results turned out negative, which one medical practitioner described “as a result that would be almost impossible to obtain.”

He said the request was made in a telephone conversation between top diplomats of the two countries on Feb. 18, noting that Indian Prime Minister Narendra Modi had pledged to do his best in assisting Cambodia to meet demand for vaccines.

Cambodia intends to inoculate 10 million people out of a population of 16 million. Australia and China have already announced significant contributions to help Cambodia combat the disease.