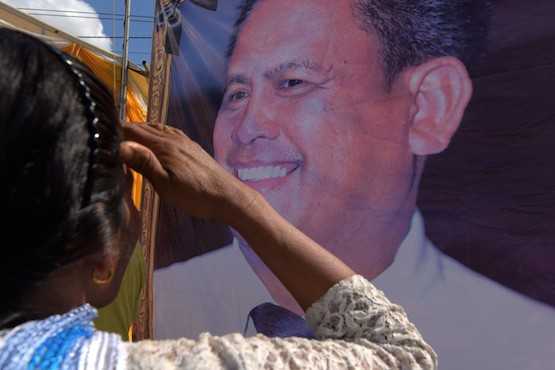 A Cambodian woman looks at a portrait of prominent Cambodian critic Kem Ley during the first anniversary of his murder at his mother's home in Takeo province on July 9, 2017. (Photo by Tang Chhin Sothy/AFP)

A Cambodian court has sentenced a woman to a one-year jail term for posting a video clip on her Facebook page accusing Prime Minister Hun Sen of ordering the murder of government critic Kem Ley more than a year ago.

Hin Van Sreypov, aged 37 and a former member of the now-banned Cambodia National Rescue Party, was also fined one million riel (US$249) by the Phnom Penh Municipal Court on a charge of “incitement to commit a felony,” local media reported.

Authorities gave no explanation as to what the felony was, the Phnom Penh Post newspaper reported on Jan. 11.

Hin Van Sreyov, also known as Heng Leakhena, was arrested on July 12, 2017, at a bus station after posting the accusation of Hun Sen’s involvement in the murder on her Facebook page on July 9.

She had just attended a memorial ceremony marking the first anniversary of Kem Ley’s death. Though a former soldier was sentenced to life for the murder in March 2017, government complicity in the critic’s death is widely suspected.

Cambodia’s courts are often accused of lacking independence by rights groups, who say the government seeks to limit freedom of expression by using the judiciary to clamp down on criticism of Hun Sen.