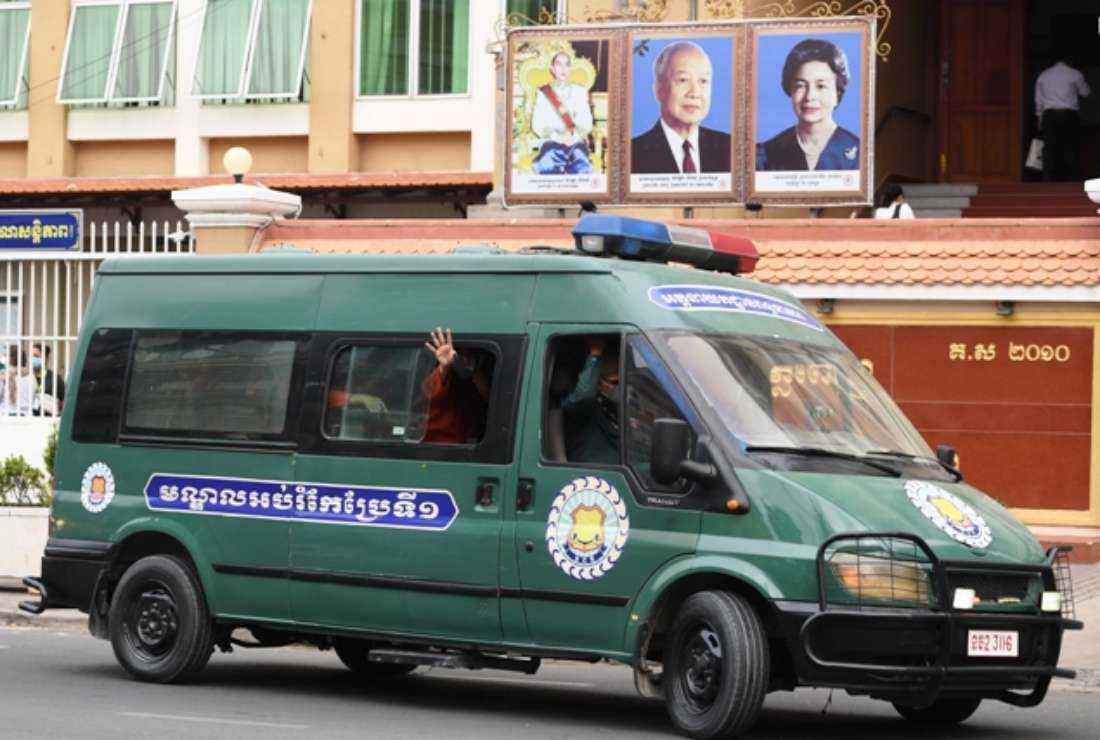 A jailed opposition member waves a hand from a prison van upon his arrival at Phnom Penh Municipal Court in Phnom Penh on March 17 as the court sentenced opposition figures including exiled opposition leader Sam Rainsy over an alleged plot to topple Prime Minister Hun Sen. (Photo: AFP)

Another seven opposition political activists have been jailed in Cambodia, for between 18 months and three years, after they were convicted for insulting King Norodom Sihamoni and attempting to topple the government of Prime Minister Hun Sen.

Judge Khun Sona noted that all seven were former members of the outlawed Cambodian National Rescue Party (CNRP) adding the offenses were committed between 2018 and 2021.

Hundreds of CNRP supporters have been rounded-up, charged and many jailed following massive street demonstrations and a crackdown in 2017 which was stepped up three years later after leader-in-exile Sam Rainsy threatened to return and oust the government.

Khun Sonna said Lanh Thavry and Mich Heang were currently in prison while the remaining five were still at large and arrest warrants had been issued.

According to the government-friendly Khmer Times, Mich Heang shouted “it was injustice, the court is just a government tool” as Khun Sonna completed the sentencing. “I did not agree with my conviction because I did not commit anything as accused. I will appeal against it.”

Lanh Thavry had previously told the court he had used Facebook to express his opinions, which were in regards to the 40th anniversary of the Vietnamese invasion of Cambodia, which ended the brutal rule of the Khmer Rouge.

The court heard that Lanh Thavry, on Jan. 7, 2019, posted on Facebook: “That was the day our Khmer people fell into the hands of Vietnam because Hun Sen was a Vietnamese puppet for 40 years.”

Later that month, Lanh Thavry wrote: “The dictator’s order is to shoot, kill or arrest or destroy their opponents in order to keep the peace for ‘Hun’ family and their allies.”

In December of the same year, he wrote: “The king issued a royal decree to give land to Vietnam. Therefore, every Khmer must wake up! Otherwise, our Cambodia will be lost.”

In a separate announcement, the treason trial of former CNRP leader Kem Sokha will resume next Wednesday after a marathon of 51 hearings since his hearings began in January 2020. He was arrested two years earlier.

His arrest and long-running trial have upset human rights groups who say the charges are politically motivated, the trial is being deliberately dragged out and have called for his release.

“At this point, I ask the government – as well as the Ministry of Justice – to take steps to end the seemingly endless questioning. If there is no guilt, release him,” Yi Soksan, an official at rights group ADHOC, told reporters.

“If there is guilt, take action. Do not draw out this tiring emotional process,” he said.