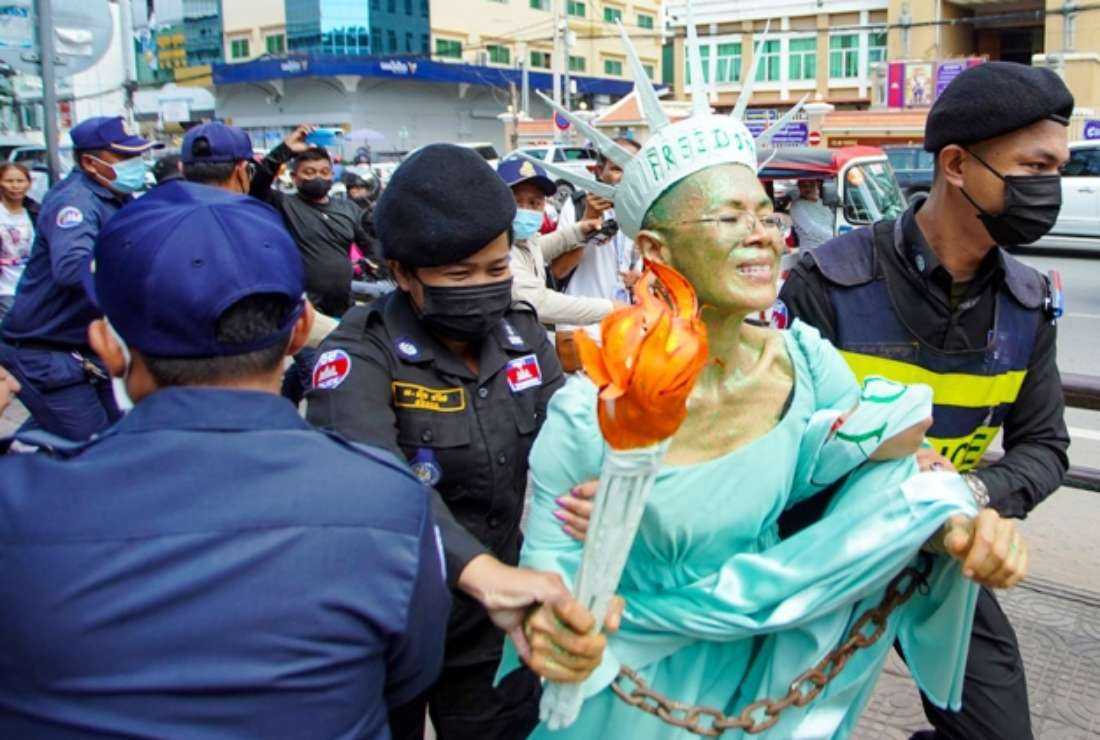 Cambodian-US human rights advocate Theary Seng, dressed as Lady Liberty, is arrested by police after being found guilty of treason in her trial in front of Phnom Penh Municipal Court on June 14. (Photo: AFP)

Rights groups are outraged by the prison sentences handed down to supporters of the outlawed Cambodian National Rescue Party (CNRP) holding them guilty of incitement, conspiracy and treason.

Phnom Penh Municipal Court on June 14 sent about 60 people, including 27 currently in exile and tried in absentia, to between five and eight years in prison.

Among them was American-Khmer lawyer and Khmer Bible editor Theary Seng, who arrived outside the court dressed as Lady Liberty wearing a crown with “Freedom” written on it.

Rights groups said the charges were politically motivated and part of the government’s wider crackdown on dissent which first emerged in late 2017 when the courts dissolved the CNRP, forcing many of its leaders to flee abroad.

“The show trial of members of an opposition party that has long since been dissolved by the courts exposes the Hun Sen government’s fear of any vestige of democracy in Cambodia,” said Phil Robertson, deputy Asia director at Human Rights Watch.

“By creating a political dynamic that relies on intimidation and persecution of government critics, Hun Sen demonstrates his total disregard for democratic rights"

“Foreign governments, the United Nations and donors should press the government to quash these convictions and end its broad attack on Cambodia’s remaining civic and democratic space.”

He said today’s verdict was one of two mass trials initiated against 138 former CNRP leaders who allegedly backed an attempt by leader-in-exile Sam Rainsy to return to Cambodia in November 2019 to oust Prime Minister Hun Sen.

On May 3, the court concluded the trial against the defendants, including Sam Rainsy and other exiled leaders Eng Chai Eang, Ho Vann, and Mu Sochua, some of whom already face prison time from previous convictions in other politically motivated cases.

CNRP co-leader Kem Sokha remains under house arrest after being charged with treason. His trial restarted in January after a two-year delay blamed on the pandemic.

The dissolution of the CNRP enabled the long-ruling Cambodian People’s Party (CPP) to win every seat contested in the National Assembly at elections in mid-2018.

“The mass trials against political opposition members are really about preventing any electoral challenge to Prime Minister Hun Sen’s rule,” Robertson said. “By creating a political dynamic that relies on intimidation and persecution of government critics, Hun Sen demonstrates his total disregard for democratic rights.”